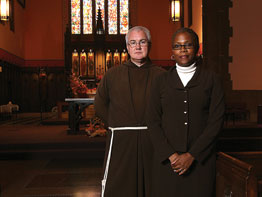 As Barbra Swann prepared for a Nov. 11 vigil at the Northeast Baltimore site of her son’s 2006 murder, she took a moment Oct. 30 to pray for guidance at St. Ambrose, Park Heights.

This is the parish where her son, Brian Christopher Pope, was baptized, educated, confirmed and memorialized.

On what would have been her son’s 37th birthday, the 54-year-old Randallstown mother of five walked through the ornate church and remembered her son’s shining moments as an altar boy.

Fighting a wave of emotion, Ms. Swann shared some of her son’s accomplishments with St. Ambrose pastor Father Paul Zaborowski, O.F.M. Cap., – along with some of his failings – as the two firmed up the program for the vigil to commemorate his life and draw attention to the gun violence that has taken the lives of so many in the city.

Ms. Swann has invited Baltimore Mayor Sheila Dixon to attend the 3:30 p.m. memorial vigil in front of her late son’s former business at 2105 Garrison Boulevard in Walbrook Junction, as well as family members of other murdered Baltimoreans – and she wants area politicians and public officials to see the human side of the triple-digit-city-bloodshed statistics.

“I hope the mayor comes, or sends a representative,” said Ms. Swann, who chose Nov. 11 because it marks the first anniversary of her son’s still unsolved murder. “I want the public to know that each person who is murdered is more than a growing number in a crime book. That one murdered man affects the lives of so many.”

Mr. Pope – a married father of three sons – was working in his refurbished appliance store “The Real Deal” the evening of Nov. 11, 2006, when someone shot him in the back of the head, Ms. Swann said.

No arrests have been made in the year since his death and family members plan to announce during the vigil they will offer a substantial reward to anyone who provides information leading to a criminal charge in the case.

Growing up with an active involvement at St. Ambrose, the influence of parish life would have a lasting impact on Mr. Pope and saw him through some troubled times, his mother admitted.

A year before graduation, Ms. Swann’s industrious – but headstrong – second son opted to drop out of high school, and a drug-related charge eventually landed him in prison for a few years.

However, Mr. Pope did in time graduate from Harbor City Learning Center, attended community college where he played baseball, discovered a love for the theater and launched a thriving business.

“He wasn’t perfect and he made some bad choices along the way,” she said. “But, he had really turned things around for himself and he was very community minded. He even hosted a Halloween party for the neighborhood children at his business just a short time before he was murdered.”

When he delivers his homily at the vigil, Father Zaborowski plans to call attention to a city murder rate that is nearing 250 so far this year, and more than one of those cases has touched his parish community.

On the morning of Oct. 30 – for instance – he offered a funeral Mass for the 19-year-old grandson of one of his parishioners who had been shot and killed on a street near St. Ambrose less than a week earlier.

Five students who attend the St. Ambrose Catholic School have witnessed the gun-related deaths of one of their parents, Father Zaborowski said.

“People need to cry, mourn and remember,” he said. “The church and the community need to give people hope who so often feel marginalized. They need our support. They also need a little justice.”

Though Ms. Swann says in her heart she has forgiven the person who murdered her son, she would like to see that individual brought to justice to prevent them from killing others.

“I would also like to hear them say they are sorry,” she said. “My Catholic teaching is to forgive and I have finally been able to do that and I pray for my son’s killer’s salvation. I don’t have a hateful heart and that has brought me some peace. But, I also pray that person hasn’t killed anyone else.”