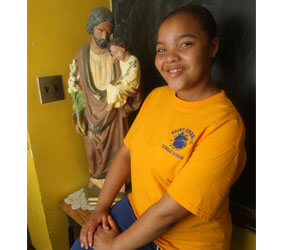 Erica, a sixth-grader at St. Ambrose Catholic School, was personally responsible for introducing five of the 16 youths to the Catholic Church. They were classmates and friends who had come to love St. Ambrose as much as Erica.

“That’s perfect proof that even our little ones have the power of the Spirit working in them,” Father Zaborowski said. “We have to be careful to not undersell the power of young people.”

Erica watched on with pride.

“I felt like I could do it again and invite some more people,” Erica said with a wide smile. “I love this church.”

Around the hallways of the school and in the pews of the church, Erica is known as a “mini-evangelist” who reaches out to her peers to share her love of the faith.

“Erica is St. Ambrose’s school and church missionary,” said Betty Butler, the school’s music teacher. “She is very persistent, not afraid, and she knows how to present herself.”

A member of the parish choir and liturgical dance group, Erica also serves as a lector and usher. One day, she hopes to be a catechist for young people.

Pamela Sanders, the school’s principal, said Erica, “really is a reflection of what Catholic schools are supposed to be about.”

When one classmate had expressed her confusion about her own faith’s worship practices, Erica told her to try St. Ambrose. Her classmate did and became hooked.

The Coles and Nelsons are involved in nearly every aspect of the parish, Father Zaborowski said.

“Everyone steps up,” he said. “The apple doesn’t roll far from the trees. They are a good Catholic family.”

Emory said Easter vigil showed that his daughter was a true beacon of faith.

“I was very proud of her,” he said. “She did a really great thing.”

When Butler started the church choir a few years ago, she knew she needed Erica in the choir because of her open spiritual connection.

“Erica is a joy,” Butler said. “When Erica is not with us in the choir, I suffer. She is a necessity.”

During some recent confirmation preparations, Erica wrote a letter to Auxiliary Bishop Denis J. Madden. It offered a window into her faith philosophy.

“I can do more than just say ‘Amen,” Erica wrote. “I try to put my words into action.”