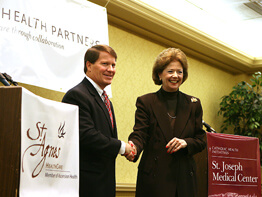 Stopping short of a merger, St. Agnes Hospital in Baltimore and St. Joseph Medical Center in Towson are joining forces in a new strategic alliance hospital leaders say will improve quality and increase access to medical care in the Baltimore area and beyond.

The partnership, called “Mission Health Partners,” will initially be made up of St. Agnes and St. Joseph, but officials hope it will expand to include other faith-based and secular hospitals with similar missions.

The health care institutions, while remaining independent and keeping their names, will share areas of expertise as they develop a health network delivery system.

Plans for the joint venture include the integration of select clinical services and physician networks as well as the expansion of ambulatory care and community outreach.

In a Jan. 19 press conference at the Radisson Hotel at Cross Keys, Baltimore, St. Agnes CEO Bonnie Phipps said the collaboration will allow both hospitals to maximize their resources and better reach out to the uninsured.

John Tolmie, St. Joseph CEO, said Mission Health Partners will provide a special focus on promoting preventative healthcare and joint outreach programs. He noted that St. Joseph recently launched a Web site promoting cardiac care that could be expanded to St. Agnes. Obesity and teen steroid use are other areas where the new alliance will direct its energies, he said.

Some of the top offerings at St. Joseph include orthopedics, cardiac care, cancer treatment and obstetrics.

While areas of expertise will be shared, there are no plans to join services or departments.

“Mission Health Partners marks the beginning of what we have to do to address health care disparities,” said Baltimore City Councilwoman Helen Holton. “I believe the idea will carry across the country to provide health care for everyone – not just those who can afford it, but for those who need it.”

In an interview with The Catholic Review, Ms. Phipps said corporate leaders at Ascension Health (affiliated with St. Agnes) and Catholic Health Initiatives (affiliated with St. Joseph) asked hospitals leaders not to pursue a full merger because it could affect bond ratings. But they fully endorsed the alliance, she said – as did the religious sisters who established the hospitals.

“I think it gives us a broader reach,” she said.

While specific financial terms of the arrangement were not revealed, both organizations are contributing equal amounts of capital to the new venture. Mission Health Partners will operate as a non-profit organization with oversight by a management board that will include representatives from St. Agnes and St. Joseph.

Baltimore County Executive Jim Smith said the coming together of the two hospitals serves as a challenge to other hospitals to pursue a regional approach to healthcare.

“Healthcare knows no boundaries,” he said. “This is a commitment to providing the very best to our communities. It’s a fantastic opportunity.”
St. Agnes and St. Joseph are almost identical in size, with St. Agnes offering 323 beds and St. Joseph 374 beds.