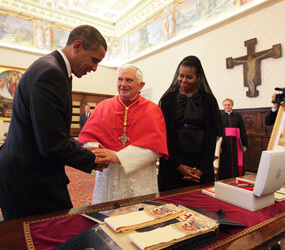 VATICAN CITY – When Pope Benedict XVI gave President Barack Obama a Vatican document on bioethics, he was trying to be clear with him about church teaching and open a path to further dialogue, the Vatican spokesman said.

Jesuit Father Federico Lombardi, the spokesman, told reporters after the meeting between the pope and the president that, in giving Obama the document July 10, “the intention was not be to divisive or political, but for clarity and objectivity; to say that, for us, this is extremely important.”

Pope Benedict gave Obama the document “Dignitas Personae” (“The Dignity of a Person”), which was published in December by the Congregation for the Doctrine of the Faith.

In discussing issues such as abortion, artificial fertilization and stem-cell research, the document started with two fundamental church teachings: that the human being is to be respected and treated as a person from the moment of conception and that responsible human procreation occurs in an act of love between a man and a woman in marriage.

“There was no intention to be polemical,” Father Lombardi said. “I do not agree with the idea that the pope was trying to point out their differences.”

“It is important to talk about these things and to find a path to dialogue,” he said.

The spokesman said Pope Benedict told him after the meeting that he felt Obama listened carefully, and the pope said that “the president explicitly expressed his commitment to reducing the number of abortions” and demonstrated his attentiveness to the church’s concerns on a variety of moral issues.

In a briefing aboard Air Force One for reporters accompanying Obama to Accra, Ghana, Denis McDonough, deputy national security adviser for strategic communications, said the president and the pope had an extensive conversation about bioethics and abortion.

McDonough said the president emphasized his interest in finding common ground on reducing abortion and that Obama said he was looking forward to reading “Dignitas Personae.”

Father Lombardi said the Vatican is very well aware of and supports the U.S. bishops in their efforts to try to convince the Obama administration to respect human life.

But, he said, the Vatican did not consult with the bishops in preparing for the visit, which the pope had been looking forward to for months.

“The election of Obama had an impact of global importance” and his policies have been known and followed “by everyone, including the pope and the (Vatican) secretary of state,” Father Lombardi said.

“I think here we are talking about a level of attention and knowledge that I would say is very broad,” he said.