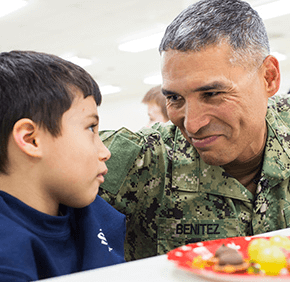 By Paul McMullen
pmcmullen@CatholicReview.org
Twitter@ReviewMcMullen
ABERDEEN – An unexpected gift from overseas weighing several hundred pounds arrived a week before Christmas for a Harford County family.
Minutes into an impromptu Christmas party in the St. Joan of Arc parish hall in Aberdeen on Dec. 18, the father of St. Joan of Arc School third-grader Mia Benitez and Maddox, a kindergartner, came striding out of the kitchen.
Navy Reserve Petty Officer Jesus Benitez was supposed to be in Djibouti, on the Horn of Africa, where he is in the middle of a year-long deployment. In early November, however, he informed his wife, Deanna, that he had been granted 15 days leave, a development they kept hidden from their children.
She thought Maddox “might not crack a smile” and that Mia would be “goofy” happy upon his arrival. Both appeared overwhelmed by the development.
A few minutes after the reunion, before the two held hands on a short walk, Maddox said he was looking forward to playing Super Mario Brothers with his father, who has considerable IT skills.
See video of the homecoming.
Benitez, 45, originally from Harlingen, Texas, has been a reservist since 1996, when he completed six years on active duty. He met his wife through their jobs with Southwest Airlines. She is a Bel Air native who grew up in St. Margaret Parish; the family resides in Abingdon and worships at St. Francis de Sales Parish.
Benitez had been separated previously from his family during summer camp, but nothing like this.
The four bonded for a week last June in Norfolk, where he was undergoing training, before he departed July 1 for Camp Lemmonier, a U.S. Navy base, to provide tactical communications and satellite networks, he said, “for our partner African nations that enable them to take the fight to terrorists.”
“There is a lot happening in Africa,” he said, “that people don’t hear about.”
The children did not expect to see him in person until June 4, 2015. The four had Skyped as recently as last weekend, and the children were resigned to doing the same Christmas Day.
It wasn’t the first such homecoming at St. Joan of Arc School, where approximately 1 in 4 students come from families where the parents are active or retired military, and many more parents are civilian employees at Aberdeen Proving Grounds.
Father William Franken, pastor, joined principal Virginia Bahr, teachers and staff welcoming grades that include Mia and Maddox to the church hall. Sequestered out of view, Benitez got a glimpse of his daughter and admitted to being anxious.
He had been on the road for some 26 hours, having taken a commercial flight out Djibouti–Ambouli International Airport at 7 p.m. (11 a.m. in Baltimore) Dec. 17, then driving a rental car from Dulles International to BWI, where he connected with his wife.
“There are a bunch of gifts for him under the Christmas tree, pajamas, and an Oriole mug and T-shirt,” Deanna said the day before her husband’s arrival. “Mia thinks we’re putting them in a box Christmas Eve and they’ll get to her dad the next day.”
Also see:
Beloved prison chaplain dies
Archbishop Lori joins mayor in vigil against violence
PrevNext