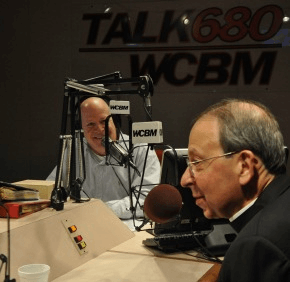 By Christopher Gunty
editor@CatholicReview.org
On the air for nearly 70 years, the Radio Mass of Baltimore will move Jan. 4 to a new station and will add a half hour of Catholic programming after the Mass.
The Mass moves to Q1370 WQLL AM where it will be broadcast at 9 a.m. on Sundays, followed by “Catholic Baltimore,” at 9:30 a.m.
The radio Mass is a ministry of the Maryland Jesuits and St. Ignatius Parish in Baltimore as a way to reach the sick, homebound, and imprisoned and others interested in the liturgy.
“Catholic Baltimore,” will initially feature “mostly content from national Catholic radio partners until we gradually are able to produce mostly all local content,” according to Sean Caine, executive director of the Archdiocese of Baltimore’s Department of Communications, which will produce the show. “The format will consist of interviews and commentary on current issues of concern to Catholics and will also be focused on evangelizing those who are no longer active in the Church.”
The Mass and information show will be simulcast on Q1370’s website at q1370.com as well as on translator 99.9 FM, which reaches White Marsh, Bel Air and Harford County. The hour-long program will be rebroadcast at 6 p.m. Sundays on sister station WCBM 680 AM.
“With the advent of digital technology, our outreach has expanded,” Jesuit Father James Casciotti said in a note on the Mass’s webpage. “WQLL/WCBM streams all of its broadcasts onto the Internet. Anyone in the world with a computer can listen to our Sunday celebration of Mass.”
In a Dec. 11 on-air interview with WCBM’s morning team of Sean Casey and Frank Luber, Archbishop William E. Lori said he is grateful that the radio Mass will have an hour on the stations. “I’m glad to have local Catholic programming in Baltimore for the first time in years.”
He added that the programs will allow the church to advance its message throughout the area. “I see this as a tremendous tool of evangelization,” he said.
Casey noted that the WCBM team “is looking forward to this partnership,” noting that the station’s signal reaches Baltimore City and the five surrounding counties in Maryland.
For more information on the Radio Mass of Baltimore, visit www.radiomass.org.
Also see:
Navy Reserve Office surprises children, coming home for Christmas
Beloved prison chaplain dies
PrevNext