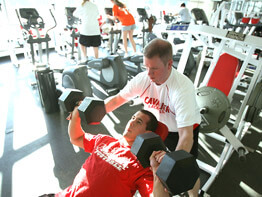 Kids are flocking to it. It’s an off-season program that makes student-athletes faster, stronger and better, and it’s free to the student body of Archbishop Spalding High School, Severn.

Rob McBride is in his fifth year as a Spalding physical educator. Now, since Spalding’s state-of-the-art fitness center came online two years ago, the school, its students and the community are making the most out of this commitment to fitness.

McBride works with 27 sports and 49 teams. It’s optional for student-athletes, but it’s a leg up on the competition and that’s the edge Spalding is looking for.

“If you want to compete and be competitive in high school sports these days, it’s a year-round process,” said Lee Dove, athletic director for Spalding. “Conditioning and strength training are definitely huge components of being successful.”

In 2006, McBride became a certified strength and conditioning specialist. His charge is to apply scientific knowledge to train athletes for the primary goal of improving athletic performance.

From pre-testing to post-testing, McBride has his finger on the pulse of hundreds of student-athletes each week. McBride has inside weight training coupled with outside speed and agility drills, developing individualized programs designed for maximum success.

McBride tracks it all and takes a huge burden off coaches who often use their preseason to get their kids in shape. Those working with McBride go to try-outs in shape and ready to learn the offensive and defensives series while their stamina and strength are at full tilt – before the first game gets underway.

Parents and coaches alike are thrilled with Spalding’s commitment to the student-athlete. It’s no secret that some parents spend thousands of dollars each year on personal trainers for their children. They secure memberships to local training centers offering the same services that Spalding students have right on their own campus every day.

“Kids get out of it what they put into it,” said McBride. “It’s also a great team bonding experience and a way to keep kids motivated.”

McBride also creates a special off-site training program for students who work or have memberships to local family health clubs, but he conducts the same pre- and post-testing to ensure success.

McBride is pleased with the creation of this program and his role in it. This past Christmas, alumni returned over the break to work out and stated on numerous occasions how they wished this program had been available to them when they were Spalding students.

The fitness center is open to the entire school community, and McBride runs a one-week strength and conditioning camp in the summer for younger children in the community. It’s a win-win for Spalding and McBride, who see the benefits to this great opportunity every day – especially for those looking for an edge.