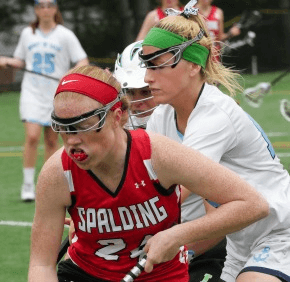 “Our goal is to get a little better every game,” Spalding coach Don Restly said. “We shared the ball, and we were able to play some kids who hadn’t gotten in much.”

Spalding went ahead 2-0 before two minutes had been played. De Sales tied it at 2, but the Cavaliers went on an 8-1 run to lead 10-3 at the half. The Sailors got within 12-9 with 17:31 remaining, before Spalding steadied itself.

Emily Cooper, a senior attackman who will attend Loyola University Maryland, led the Cavaliers with six goals and an assist. Seniors Alexis Phillips and McKenna Orozco, junior Julianna Brown, and sophomore Lillian Stump had two goals apiece for the victors.

Orozco was playing against a future college teammate, as both she and Mount de Sales senior goalie Maddie Fields are headed to Hofstra University in Hempstead, N.Y.

Ranked No. 5 in The Sun rankings, Spalding improved to 5-4 overall and 3-3 in the Interscholastic Athletic Association of Maryland (IAAM)’s A Conference, one of the nation’s premier leagues.

Spalding’s assistant coach is Restly’s daughter Tara, a 2007 graduate of the school.

The Cavaliers have already beaten St. Mary’s High and Notre Dame Preparatory, and will try to extend their unblemished mark against Catholic opponents when they visit John Carroll on April 9.

The Patriots are coming off an 8-6 loss to McDonogh School, the nation’s No. 1 team and the owner of a 121-game win streak. Both John Carroll and Spalding are in the mix for playoff berths.

Climbing for a cause: Mountaineer set for quest to climb six of the world’s tallest peaks

Beyond the Bell: Our Lady of Mount Carmel a national model for service