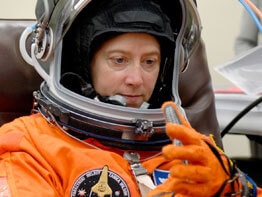 IRONDEQUOIT, N.Y. – As Bishop Kearney High School students in Irondequoit watched the Oct. 23 liftoff of the space shuttle Discovery, they also witnessed an alumna of the school add her name to the history books.

The shuttle’s commander, Pam Melroy, is a 1979 Bishop Kearney graduate who also piloted space missions in 2000 and 2002. A retired Air Force colonel, Ms. Melroy is the second woman to command a NASA space shuttle: The first was Eileen Collins, an Elmira native who commanded shuttle missions in 1999 and 2005.

The students, with their media and educational credentials, gained special access to areas of the Kennedy Space Center in Florida, including a spot at the Cape Canaveral launch site.

Other school events that tied in with the launch included a one-hour mission briefing between the space center and the school’s advanced placement science students Oct. 22 and a discussion about the space mission with Ms. Melroy’s parents, David and Helen, earlier in the month.

On Oct. 25 the shuttle linked up with the International Space Station to deliver the Harmony module onboard. The module will allow for the arrival of new research labs built by the European Space Agency and the Japanese Aerospace Exploration Agency.

The mission also was to include five space walks, including one to experiment with a way to repair the shuttle’s heat shield while in orbit.

On the mission with Ms. Melroy are pilot George Zamka, mission specialists Scott Parazynski, Doug Wheelock, Stephanie Wilson and the European Space Agency’s Paolo Nespoli. The crew will drop off Expedition 16 flight engineer Daniel Tani at the space station, where he will join Expedition 16 commander Peggy Whitson and flight engineer Yuri Malenchenko, who arrived aboard the station on a Russian craft Oct. 12.

Discovery also will pick up space station crew member Clayton Anderson, who has been at the station since June. The shuttle is to return to Florida Nov. 6.

While Bishop Kearney’s U.S. history students silently watched the liftoff on digital projection screens in their classrooms, school administrators and some 1979 alumni watched the launch at a reception in the school’s library.

At the reception, Sister Stephania Walczak, a School Sister of Notre Dame and former teacher at Bishop Kearney, recalled having Ms. Melroy in her class.

“She was such a sparkler, and she’s always wanted to do this,” Sister Walczak told the Catholic Courier, newspaper of the Rochester Diocese.

As the shuttle accelerated to more than 4,000 miles per hour, it became a tiny, bright dot in the sky. After only a few minutes, a camera mounted on the shuttle showed the earth becoming a distant ball. Updates from NASA and the shuttle crew confirmed that the takeoff had been flawless.

“That was such a proud moment to watch that shuttle go up and to hear Pam’s voice,” said Bishop Kearney President Donna Dedee, who was a high school classmate of Ms. Melroy’s.

Prior to the liftoff, history teacher Annemarie Sheppard pointed out the cluster of Bishop Kearney students who were watching the launch in Florida.

She said it was beneficial for the students to be able to connect a shuttle launch with their fellow students and with Ms. Melroy, who was once a student like them.

The event marked the first time junior Michelle Rauchfuss had watched a launch.

“Watching this happen in real life is such a big deal,” Michelle said.