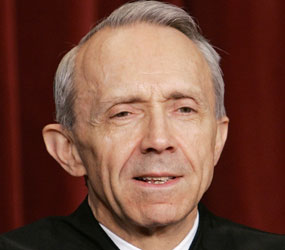 WASHINGTON – As Justice David Souter prepares to retire this summer after 19 years on the Supreme Court, he leaves a mixed legacy of jurisprudence: not so friendly to pro-life perspectives on cases involving abortion, but sometimes strong for religious interests in First Amendment areas.

When Souter was nominated to the court by President George H.W. Bush in 1990, many observers predicted he would be a conservative vote on issues such as abortion restrictions, government aid to public schools and religious expression in schools and public places.

His actual record turned out to be different from those predictions.

In the first big abortion-related case to come up after he was seated, Planned Parenthood v. Casey in 1992, Souter co-wrote the plurality opinion that upheld Roe v. Wade.

In fact, said Michael Moses, associate general counsel for the U.S. Conference of Catholic Bishops, that opinion didn’t just reaffirm the 1973 ruling; it changed the legal standard by which government regulations on abortion are weighed.

While Roe legalized abortion nationwide, it required heightened judicial review of abortion regulations that often led to them being overturned in court.

In some ways Casey made it easier for states to regulate abortion. The ruling upheld requirements for informed consent, parental consent, 24-hour waiting periods and record keeping and reporting. But it reaffirmed the part of Roe that said a woman has a right to abortion for any reason before viability and for any maternal health-related reason after viability.

That and subsequent votes by Souter in abortion-related cases led Clark D. Forsythe, senior counsel for Americans United for Life, to describe him as one of the most pro-abortion members of the court.

“As many votes on abortion have been 5-4 decisions, his presence on the court has extended the tragedy of abortion by restricting the right of states to make their own decisions on abortion law,” said a statement from the nonprofit, public-interest law firm.

When it came to religious expression or rights, Jeffrey Hunter Moon, solicitor for the USCCB, said, “it’s fair to say that in some cases Justice Souter came down where we would have liked” and sometimes he didn’t.

For instance, Moon noted that in 1995 Souter wrote the unanimous opinion in Hurley v. Irish-American Lesbian & Bisexual Group of Boston, which upheld the right of the Boston Allied War Veterans Council to exclude a gay rights group from the St. Patrick’s Day parade they run.

“The issue … is whether Massachusetts may require private citizens who organize a parade to include among the marchers a group imparting a message the organizers do not wish to convey,” the opinion said. “We hold that such a mandate violates the First Amendment.”

However, in another case involving the Boy Scouts’ right to exclude certain people, Souter joined the losing side, which would have said the state of New Jersey can prohibit the Scouts from barring homosexuals as leaders, said Moon.

Mark Chopko, former general counsel for the USCCB, said Souter’s jurisprudence in all those cases could stem from a libertarian perspective that government should stay out of people’s private lives.

Chopko, who is now a partner at Stradley, Ronon, Stevens & Young, told CNS that the libertarian notion that smaller, less-involved government is always better for the individual seems to have driven Souter’s legal thinking.

“That would explain his thinking in Casey,” for instance, as well as his opinions in Hurley and the Boy Scouts cases, Chopko said.

However, such an approach in cases like Casey requires “moral blinders” to the reality that individuals exist in relationships with communities, families and neighborhoods, he said. “The libertarian right has to be balanced against our responsibilities to one another.”