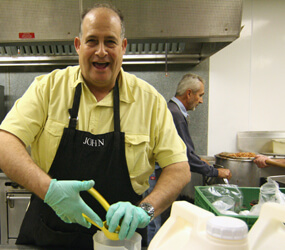 And this means that John Ganem is making his famous potatoes, which guests of the downtown soup kitchen – the working poor and homeless – find particularly delectable.

“I try to make it so it’s memorable for them,” Ganem said. “I don’t serve something unless I’d eat it.”

Ganem has been spending one night a week at the soup kitchen for more than 10 years. He was an employee of Salt River Project and heard about Andre House through a profile in his company’s newsletter.

So he showed up one Thursday and was put to work cutting vegetables like many Andre House newbies.

“After a few weeks here, they brought in some food, and I made some suggestions on what to make with it, because I like to cook,” he told The Catholic Sun, newspaper of the Phoenix Diocese.

The coordinators at the time were duly impressed and Ganem – along with as many as 25 other volunteers each night – have been churning out delicious dinners to hundreds of hungry men, women and children ever since.

Andre House was born in 1984, when two Holy Cross priests moved into a rented home with the intention of living with and serving the poor. They were taking a page from Dorothy Day’s Catholic Worker Movement.

“We’re the Catholic Worker house that went on steroids,” joked Holy Cross Father Eric Schimmel, director of Andre House. “We just blew up, because we saw a need that needed to be filled. And if there’s a need that we can fill, we have to.”

Andre House offers showers for its guests as well as lockers they can rent for a nominal fee. There’s also transitional housing for six men and three women to occupy while searching for work.

Andre House employs a core team of eight workers, while as many as 6,500 volunteers pass through its halls every year.

Filling that need means busy days for Father Schimmel and his staff. They begin every morning with a couple of workers traveling to a food bank where Andre House gets a lot of its produce. Then, there’s a staff meeting at 9 a.m., followed by Mass in the parking lot.

The afternoons begin with midday prayer. Andre House offers showers to its guests in the afternoon, and there are staff members working by the lockers. Dinner is served between 5:30-6:30 p.m. They typically serve around 600 meals a night, but that figure tends to swing up and down throughout the month.

At any rate, it’s a lot of work for eight men and women, and the 25 volunteers who come in each night help immensely. There’s actually a waiting list to volunteer. If you call their volunteer hot line number, a recorded message says they have no available spots until after the holidays.

“Father (Basil) Moreau, our founder, would be happy if I said it’s because of divine providence – and it is,” Father Schimmel said about the soup line’s popularity with volunteers.

“A lot of the people who come here talk about their visions or expectations being changed in a very positive way,” he said. “If you’re serving on the soup line, you’re rubbing elbows with the guests, and all of those stereotypes fall away and the human dignity comes out.”

For volunteer Libby Goff, coming to Andre House began as a family affair.

“My mother volunteered here for 20 years or so, and I started coming with her,” Goff said. “She ran the showers for a couple of years on Mondays and came every Thursday for years and years.”

Goff’s mother hung up her apron about six months ago. She’s 82 years old now, and decided to slow down a little bit.

“The people here knew her by name,” she said. “She really gave a good example, because she knew them as people.”

That’s a sentiment expressed often here. For the core team and the hosts of volunteers, there’s a sense that it’s not enough just to help the needy from afar. Father Schimmel said it’s a message that’s embodied by Holy Cross spirituality.

“Our founder gave us the motto that the holy cross is our only hope,” he said. “If I’m not here, if I’m not living with these people, I can’t relate to their crosses, nor can I point out the hope to them.”