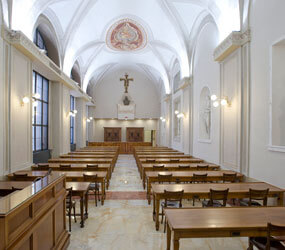 VATICAN CITY – In late July, a young woman was removing books from shelves in the Vatican Library and vacuuming the dust off of them, one by one.

Scholars have not had access to the library’s 1.6 million books, hundreds of thousands of manuscripts, or its coin and medal collections since 2007, when the absolute-silence rule in the library’s reading rooms was replaced with the ruckus of jackhammers, drills and cement mixers.

But, as promised three years ago, the Vatican Library will open its doors Sept. 20, sparkling clean and stronger than ever.

Vatican engineers had noticed the library’s floor was sagging. Even after moving most of the books, building inspectors were not convinced it was safe, so the Vatican closed the library after giving scholars only a few months’ notice.

A bit of an uproar and a mad rush on requesting copies of books and manuscripts ensued, along with widespread speculation on how long the three-year restructuring and restoration would really last.

During an interview in late July, the prefect of the library, Monsignor Cesare Pasini, held back an “I told you so,” saying simply that people can choose between “suspicion or trust.”

“It’s true that when you start this kind of work, you never know what can happen, what kind of complications can arise, or – another danger – that we would have a desire, get an appetite for doing even more, which would take time,” he told Catholic News Service.

In fact, there is a long list of things the library was able to do during the three years needed for the major work of reinforcing the floors: replacing the one old elevator and installing a second one; remodeling the main entrance and creating separate entrances for staff and for merchandise; setting up wireless Internet connections throughout the building; installing a sophisticated security and tracking system; and updating the climate-control system needed to keep scholars and employees comfortable and protect the library’s books and manuscripts.

Monsignor Pasini declined to say how much the work cost, but he said the library’s portion of the bills was covered by royalties on reproductions of library holdings; since the building is owned by Vatican City State, the city governor’s office was responsible for covering the cost of the structural repairs.

The new security system not only will help safeguard the library’s holdings, but setting it up ensured that the 90 permanent employees of the library had work to do during the three-year closure.

For the technicians who restore books and manuscripts, the closure just made their job easier because all the books were there all the time. For the technicians who photograph material requested by scholars, there was extra work at the beginning, then things slowed to a steady pace as scholars got used to looking elsewhere, Monsignor Pasini said.

But the workers who staffed the reading rooms, pulled requested volumes from the shelves and replaced them at the end of the day could have been laid off for three years.

Instead, they got up close and personal with the library’s books.

They completed a project begun in 2004, inserting an electronic tag in each of the 1.6 million books and entering into a database information about the volume – author, title, date, description, catalogue number and shelf location.

After September, when a scholar visits the library, he or she will have a magnetic badge. The security system will track the scholar’s movements within the library – setting off an alarm if the person enters a restricted area – and will simultaneously keep track of which book is with which scholar.

The system makes it much more difficult for someone to sneak into an off-limits room or to sneak a book out of the library.

But of more importance on a day-to-day basis, Monsignor Pasini said, is that installing the tags gave the Vatican Library a chance to double-check and correct its catalogue and that, from now on, the system will keep track of the location of each and every book.

“In such a large structure, there has always been the possibility of losing something,” Monsignor Pasini said.

The Vatican Library does not check out books, Monsignor Pasini said, although with authorization from the Vatican secretary of state, museums and other libraries have borrowed books, manuscripts, coins or medals for special exhibits.

The only person allowed to check out a book is the pope, he said.

Pope Benedict XVI visited the library just before it closed in 2007 and has promised to return to see the results of the work, Monsignor Pasini said.

“Occasionally, he has requested specific volumes,” which are promptly delivered to his office, the monsignor said. “It’s the pope’s library.”