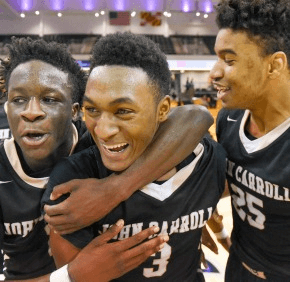 By Paul McMullen
pmcmullen@CatholicReview.org
Twitter: @ReviewMcMullen
TOWSON – A substantial presence of international students at John Carroll extends to its boys’ basketball program, but coach Tony Martin’s Patriots leaned heavily on a Harford County talent to claim the title in the 45th annual Baltimore Catholic League tournament.
Immanuel Quickley, a 6-foot-3-inch sophomore guard who had already been voted co-Player of the Year in one of the nation’s premier high school basketball leagues, made a clutch three-pointer from deep on the left wing with less than two seconds remaining to give John Carroll a 51-50 upset victory over top-seeded Mount St. Joseph at Towson University’s SECU Arena Feb. 29.

For three quarters, Quickley was frustrated by a Mount St. Joseph five that includes BCL Defensive Player of the Year Pierre Johnson, who relegated the John Carroll star to looks more suited to Steph Curry of the Golden State Warriors.
On the game-winner, however, Quickley got Johnson off his feet with a pump fake, calmly scored from 23 feet, then sprinted to the other end of the floor as the John Carroll bench erupted in ecstasy.
It capped a run in which Quickley scored the Patriots’ final nine points – all with Mount St. Joseph in the lead.
“I’ve hit a couple of game-winners, but none on a stage as big as this,” Quickley said. “My teammates and my coaches trusted me.”
They do so with good reason, as Quickley has made unofficial recruiting visits to some of the nation’s most storied programs, including Duke, North Carolina and Villanova.

His precocity merits comparison to other underclassmen who established themselves among the BCL’s elite at an early age, such as Quintin Dailey of Cardinal Gibbons in the 1970s; Duane Ferrell of Calvert Hall and Rodney Monroe of St. Maria Goretti in the 1980s; Mark Karcher of St. Frances Academy in the 1990s; and Sean Mosley of St. Frances Academy, who was the tournament MVP as a freshman in 2005.
“He plays like a college veteran,” said Martin, the John Carroll coach. “Immanuel comes from a great family. His dad’s a pastor, and his mom is the chair of a high school English department.”
Quickley was a freshman starter a year ago, when the Patriots lost at the buzzer in the championship game to Calvert Hall.
“We’ve gone,” Martin said, “from the lowest of the lows to the highest of the highs.”

The third-seeded Patriots (25-10 overall) upset St. Frances Academy in the Feb. 28 semifinals with some stout defense, and needed more of the same after falling behind Mount St. Joseph 12-2 in the first seven minutes.
Mike Tertsea, a 6-9 senior from Nigeria who is headed to the University of Rhode Island, got John Carroll going with his work in the middle of a 2-3 zone, which featured five blocked shots, and hustled hard to the other end to spark a 9-0 run that earned the Patriots a 23-23 tie at the half.
The Patriots held the regular season champions without a field goal for more than seven minutes that encompassed the end of the third quarter and start of the fourth, but junior Darryl Morsell rallied Mount St. Joseph (31-5 overall) and sophomore Jalen Smith’s putback with 18 seconds remaining gave the Gaels their final lead.
It was the second BCL tournament title for the Patriots, who won it all in 2011, their first season in the league. They denied charter member Mount St. Joseph’s bid to join Calvert Hall and St. Frances Academy as seven-time champions.
“The effort was good, but it wasn’t good enough,” Gaels’ coach Pat Clatchey said. “The kid (Quickley) made a helluva shot at the end.”
The tournament’s MVP, Quickley was joined on the all-tournament team by teammate Nemanja Knezevic, a 6-6 senior from Serbia who scored 11 points; Morsell and Randy Miller of Mount St. Joseph, who had 12 and 14, respectively; and St. Frances Academy’s Kurk Lee Jr.
John Carroll, Mount St. Joseph, St. Frances Academy and host Bishop Walsh will conclude their seasons in the Alhambra Catholic Invitational Tournament, which will be held at Frostburg State University March 10-12.
Prior to tip-off, a moment of silence was observed in memory of Jerry Savage, the former Loyola Blakefield coach, who took ill at last year’s tournament and died in April.

Calvert Hall junior makes a name for himself with BCL heroics