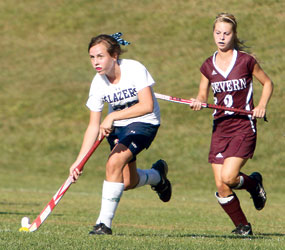 After 10 varsity field hockey players graduated in May from Towson’s Notre Dame Preparatory School, Maggie Huether wasn’t sure what this season would bring.

Fielding a team that includes five sophomores and 11 juniors, the coach has been more than pleased with an undefeated 7-0 record as of Sept. 24. She credits the outstanding spirit and hard work of all her players, but especially that of Lindsay White – a 15-year-old sophomore midfielder who is playing her first season on varsity.

White has played field hockey since the third grade at Jacksonville Elementary School in Phoenix. She’s also a member of the Greene Turtle Field Hockey Club. As a freshman midfielder on last year’s NDP junior varsity, White started every game and was one of the leaders in assists.

“I love how it’s such a fast-paced sport,” said White, a parishioner of the Catholic Community of St. Francis Xavier in Hunt Valley who also plays lacrosse for her school. “I love my team and how we all work together so well.”

White holds a 3.6 cumulative grade point average and is a member of the student council and the aerobics committee for NDP’s annual Gym Meet.

Passionate about helping others, White started her own charity in the second grade called “Shoes for Shelters.” Since its inception, the outreach has collected more than 10,000 pairs of shoes to help the homeless at Paul’s Place in Baltimore.

“I’ve always tried to get involved,” said White, who also set up a website to raise money to build a field at NDP in honor of Yeardley Love, a former student who died this year.

“It’s a good thing for other people to reach out to others,” she said.