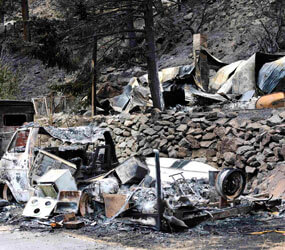 BOULDER, Colo. – When Boulder County Sheriff deputies and fire officials appeared on Michelle Murphy-Pauletto’s doorstep to tell her family to evacuate their home near Fourmile Canyon, she and her husband made one last request of their three children after most of the rushed packing was done.

“We told each of them, ‘Go get what’s special to you,’ ” Murphy-Pauletto said, recalling the day she and her husband, Randy, first saw the smoke billowing heavily through the canyon. “I have to tell you, my 9-year-old grabbed his rosary and forgot his soccer stuff.

“That …,” said Murphy-Pauletto, trailing off as she was moved to tears, “that really was the clarifying moment of what is so important in life. He forgot his soccer stuff … and remembered his rosary. It was very sweet.”

The gesture by her son, Ben, she said, helped her to refocus spiritually in a time of uncertainty, she said.

Murphy-Pauletto, a long-term substitute teacher at Sacred Heart of Jesus School in Boulder, and her husband, who works for an agricultural company, moved into a hotel temporarily with their three children and dog in tow. They waited out what would become the worst fire in Colorado’s history, destroying at least 166 homes and 6,427 acres.

By Sept. 13, the Boulder-area fire was 100 percent contained and no deaths or injuries were reported.

Murphy-Pauletto and her family were ordered Sept. 6 to vacate the home they’d spent the past five months renovating and had moved into one week before. While they were able to return to their undamaged home Sept. 11, the enormity of the situation hit them.

“That’s when you know you can only control what you can control and after that you have to let it go,” Murphy-Pauletto said. “We really just had to let it go. It makes you crazy if you try to control things you can’t.”

Murphy-Pauletto talked to the Denver Catholic Register, the archdiocesan newspaper, while she was on her way to 10 a.m. Mass at Sacred Heart of Jesus Church in Boulder Sept. 12.

“In a few months, after all the dust settles, the fire victims will still need assistance,” Father Breslin said. “They may be settling into new homes or running out of money to purchase other items. The holidays may be a time where they need our help both financially and spiritually.

“Perhaps we can help a family who needs an end table or pots and pans in their new home,” he said.

Sacred Heart’s parish school closed for one when the fire evacuation area inched close to it. But it reopened Sept. 14.

Mary Bartsch, principal at Sacred Heart of Jesus School, said a number of students’ families had to be evacuated. At the Register’s press time, she was unaware if any parishioners or students and their families had lost their homes.

“The school and community itself has gathered together clothing, food and gift certificates for families in need,” Bartsch said. “Our community has really come together. I had families open up their homes to help fellow students and families. Even our preschoolers were making cards for firefighters.”

Father Breslin in the week’s parish bulletin recommended parishioners either donate gift certificates for area restaurants for displaced people or give money to an emergency assistance fund for those who have to have wait to receive insurance money.

“Pray,” he urged. “Pray like you’ve never prayed before. If you’ve lost your Bible, come to the parish center. We’ll give you one. Don’t forget the power of the rosary.”

In the San Francisco Archdiocese, where San Bruno is located, Archbishop George H. Niederauer celebrated Mass Sept. 10 at St. Robert Church to pray for the victims of the explosion and fire there.

The fatalities included Janessa Grieg, 13, an eighth-grader at St. Cecilia School in San Francisco, and her mother, Jacki. They were home when the explosion happened. Janessa’s father and her older sister, Gabriella, a junior at St. Ignatius College Preparatory School in San Francisco, were not home, according to St. Ignatius’ principal, Patrick Ruff, in a letter to parents.

“Any death can bring grief and frustration, and this kind of loss can be especially troubling,” Ruff wrote. “What is most important at this time is that we care for and support each other. Today, at the Mass of the Holy Spirit, we prayed for the Greig family and all those affected by the explosion and fires in San Bruno.

“We will continue to work to support not only the Greigs but also all members of our community,” he said.