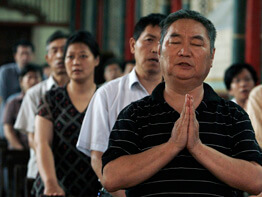 HONG KONG – Some church leaders in China who have read Pope Benedict XVI’s letter to mainland Catholics say they feel positive about it and are willing to heed the pontiff’s call for unity.

Many Catholics contacted by the Asian church news agency UCA News said they needed time to digest the lengthy and theological letter and to consider its impact.

Nuns and members of the Catholic hierarchy in China shared with UCA News their initial reactions to the papal document, made public June 30. The letter urged cooperation between clandestine Catholic communities and those officially registered with the government. It criticized Chinese government limits on church activities, but on several key issues – including the appointment of bishops – it invited civil authorities to a fresh and serious dialogue.

By July 3, some Chinese Catholics said they had read the 50-page Chinese version of the papal letter several times already. In some places in Hebei province, thousands of copies had been printed.

Bishop Joseph Wei Jingyi of Qiqihar, who has not registered with the Chinese government, and a few other church leaders told UCA News they were grateful to the pope for his concerns about the church in China. Bishop Wei, based in northeastern China’s Heilongjiang province, said the letter provides practical guidelines for church life and evangelization in China and gives directions for the church to move forward.

On July 3, the bishop was asked to meet provincial religious affairs officials about the papal letter, UCA News reported.

A priest from Hebei province’s Baoding Diocese agreed the letter is significant.

“It is time for Rome to say something” to give a clear and definite stance, he said, which is “to be friendly to those whose stance is opposite to yours.”

By revoking all previous directives from the Vatican, he said, the letter urges the church in China to gradually return to the universal church.

“Certain people may not accept or understand it,” he said, but he added he thinks every Catholic should, in obedience, “accept the document unconditionally.”

Bishop Wei said he completely agrees with Pope Benedict, especially on the revocation of past faculties and directives given the changed situation in China.

The Holy See had previously granted special faculties that effectively allowed underground bishops to ordain other bishops and to ordain priests without formal theological education. It also had urged Catholics to avoid receiving sacraments from bishops or priests who belonged to the Chinese Catholic Patriotic Association, a government-approved structure to administer registered Catholic churches.

Some clergy around China who have not registered with the government and have been functioning clandestinely told UCA News they would gather priests and laypeople together to study the letter carefully. One of them said he wants to ask all clergy – from the registered and nonregistered communities – to make their stance over the letter clear in order to work out a plan.

A lay Catholic scholar in central China said he thought it would not be too difficult for clergy who have registered with the government to accept the document. However, he added, how to put its recommendations into practice is crucial.

Although the Vatican had placed an icon with a link to the letter on its home page, UCA News reported it was not easy for many mainland Catholics to download or open the papal letter of more than 5 megabytes because of slow dial-up Internet connections and low-grade software.

A young laywoman in Beijing said there are certain points she does not understand in the letter, but that this could be due to her inadequate knowledge of the church and its situation as a whole.

Father John Baptist Zhang Shijiang, director of Hebei Faith Press, said the Catholic communities in China need time to read and consider the letter. He noted that the pope wrote from the viewpoints of spirituality, theology, ecclesiology and pastoral care. Catholics also need to study how Chinese society at large regards the letter, he added.

A few young priests from both registered and nonregistered communities who had studied abroad expressed concern over the letter’s impact on China-Vatican relations. They said they were not sure how the government would react to it, especially since both sides seem unwilling to compromise on the issue of who appoints bishops.