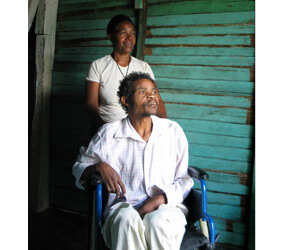 HONDO VALLE, Dominican Republic – Thanks to the Society of St. Vincent de Paul’s Long Island, N.Y., conferences and their counterpart in Hondo Valle, Negro, a blind man whose wife would lock him in the house alone while she worked her small farm, now has a safe home.

Vincentians in Hondo Valle, with support from the New Yorkers, found a house for him in the village and installed an indoor bathroom.

Melvin Santana, who works for the local parish as a driver and is a Hondo Valle Vincentian, checks on him almost every day, bringing him groceries and medications.

A short walk away, Julio, 42, who had suffered a stroke, was living in a lean-to made from sugar cane and banana leaves. On the ground he had a mattress that got wet when it rained.

Sister Jane Reilly, a Sister of St. Joseph from the U.S., said when the first visitors from the Society of St. Vincent de Paul found Julio, he was naked and had nothing but the wet mattress. He was depending upon others to bring him food.

Vincentians were able to move him into a small house near the church. His neighbors on each side bring him two meals a day. They also bathe him, wash his clothes and help bring him to the bathroom.

Sister Jane, herself a Vincentian, and Sister Babs Barry, a fellow U.S. Sister of St. Joseph, came to live in the Dominican Republic 28 years ago.

When they arrived, they must have wondered how they could ever make a difference in the lives of people in such desperate conditions, while at the same time sharing their faith that had been nourished in the Rockville Centre Diocese.

Little did they know that a visit to the Dominican Republic from a friend from back home – even though she was spending time in a different village – would lead to a twinning program between Long Island Vincentians and those in Hondo Valle that has lasted more than 21 years.

Sister Jane pointed out that the program has provided funding over the years for transportation, water projects, and the construction and rehabilitation of houses, as well as a literacy program, health care and food.

“The collaboration all these years between the Vincentians here and those on Long Island make this possible,” she added.

Sister Jane pointed out that neither Julio nor Negro receives any type of government services and no social security.

Without the Society of St. Vincent de Paul, “both would be living like animals … if they were still alive,” she told a visiting reporter from The Long Island Catholic, newspaper of the Rockville Centre Diocese.