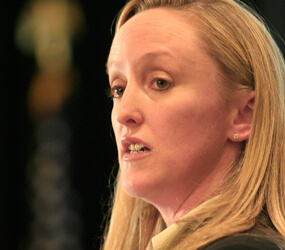 An ongoing study of the causes and contexts of sexual abuse by priests delves into a broad assortment of factors, including societal trends, treatment approaches over the decades, the character of seminaries in different generations and even comparisons of when abusive behavior began in relation to ordination.

An interim report on the “Causes and Context Study” presented to the U.S. Conference of Catholic Bishops Nov. 17 during their fall general assembly in Baltimore outlines a complex, multidimensional project. The full study, commissioned by the USCCB in 2002 as part of its response to the sexual abuse crisis, is expected to be completed by late 2010.

While specifics from the study were sparse, some of the general findings suggest there are close correlations between incidents of sexual abuse and events in society, particularly during the social upheaval of the 1960s and 1970s, the authors said.

Karen Terry, principal researcher on the study at the John Jay College of Criminal Justice at the City University of New York, and colleague Margaret Smith gave the bishops a quick overview of the findings so far, summarizing details in nearly 50 PowerPoint slides.

Among the preliminary findings the researchers reported:

– There is little evidence that homosexuality is a factor in who sexually abused minors.

“At this point, we do not find a correlation between homosexual identity and the increased likelihood of subsequent abuse,” Smith said.

– The rise in sexual abuse cases in the 1960s and a decrease in the 1980s track with other behavioral changes during the same period, including drug use and rates of crime and divorce. Such factors don’t have a cause-and-effect relationship on sexual abuse, Terry said, “but they reflect underlying social change in the United States.”

– The environment in seminaries during the period when a majority of priest-abusers received their education may be an influencing factor. In the 1940s and ‘50s seminaries were “closed and without any specific support for ‘human formation,’“ the researchers said. In the 1960s and ‘70s, the presentation said, the environment was more open, an effect of the Second Vatican Council and resignations of many priests related to some of the council’s actions.

– Beginning in the 1980s when programs in “human formation” began and seminary candidate screening became more “nuanced,” the number of reported incidents of sexual abuse falls to between 20 and 10 per year. In 1970 the count was 164, they said.

– During the period when abuse increased dramatically and dioceses were faced with handling accusations, there were “few acceptable methods of assessing and treating sex offenders prior to the 1970s,” Terry said. Diocesan leaders relied on the guidance of established treatment providers, especially in the 1980s, but those treatment approaches proved inadequate.

They also addressed how dioceses responded to abusers and to victims. Terry said the diocesan focus tended to be on responding to the needs of the priests, not the needs of victims.

She said a failure, particularly in the 1980s, to comprehend the harm to victims of abuse “reflects the lack of overall understanding of victimization at the time.”

The cost of the study is estimated at about $1.8 million. The majority – about $1 million – is being paid by the USCCB, with donations and grants covering the rest. That includes a $283,000 grant from the federal government’s National Institute of Justice.

The interim report itself was not made available in a written format. Terry and Smith declined to provide to the news media the text of material presented orally. They said it was just an interim report and that they were afraid reporters would get the information wrong. A press release with just four points from the interim report was provided by John Jay to be released by the USCCB.

Copies of the PowerPoint presentation were obtained by the press from observers at the meeting, who, along with the bishops, were provided them by the John Jay staff.