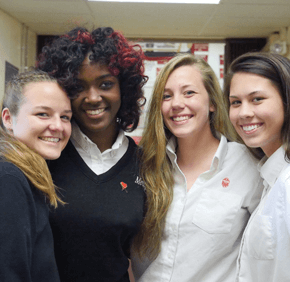 It was nearly midnight April 27 when Maya Brown heard people franticly yelling and banging on the door of her family’s apartment in Woodlawn.

The 17-year-old Mercy High School senior, who had just turned in for the night, flung open the door only to find a hallway half-filled with smoke.

The teen rushed to awaken her mother, Carla Matthews, before the two raced out of their home carrying little more than cell phones and car keys.

Standing outside in a tank top and shorts, Maya watched all her family’s belongings go up in flames.

The blessing in the disaster was the support Maya and her family received from her school community in the days following the inferno, Maya said.

On the night of the fire, one of the first people Maya called was Brianna Dorsey, a Mercy graduate who has served as Maya’s “Mercy sister” throughout high school. Dorsey brought clothes for Maya to wear.

The next day, Mercy President Mary Beth Lennon and Dean of Students Mary Ella Franz Marion met with Maya’s family to hold hands in prayer. The school community would also pray for the family during a special assembly.

Three of Maya’s closest friends, Molly Tobias, McKayla Grasham and Cassandra Paulshock, all seniors, launched a GoFundMe campaign that has already raised more than $9,000 to help Maya’s family get back on its feet and replace items not covered by insurance. Mercy faculty and staff also contributed more than $700 in money and gift cards.

“I never would have thought I would have gotten this much support,” said Maya, tears welling in her eyes. “I feel it’s overwhelming, but it’s a good kind of overwhelming. It helped me realize how much people care about me.”

Paulshock said it was natural for Mercy students to support their friend.

“We knew she would do the same thing for us,” Paulshock said.

Because the fire happened on the same night as the Baltimore riots, Maya believes the loss of her home was connected to burglaries that occurred across the street at Security Square Mall. She suspects the fire was set to distract emergency personnel from criminal activity at the mall.

John Wachter, public information officer for the Baltimore County Police, told Review in the Pew the fire is still under investigation and “the cause has not been determined yet.”

“If they did it to distract the police,” Maya said, “then they were not thinking about anyone else but themselves. They just didn’t care about anyone’s life besides theirs.”

Maya’s mother, who is temporarily living with her daughter in a hotel, said she is grateful no one was hurt. Things can be replaced, she said.

“We’ve had so many blessings since the fire,” Matthews said. “We thank God for each of them. I thank God every day.”

Founder of PRIDE program dies at 72