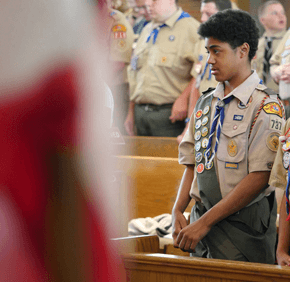 By Erik Zygmont
ezygmont@CatholicReview.org
Twitter @ReviewErik
ELLICOTT CITY – In addition to knowledge of knots, improvised shelters and Morse code, boys and girls participating in Scouting through the Archdiocese of Baltimore gain something else of value.
“It has helped me growing in my faith and getting closer to God,” said 13-year-old Grace Pellegrino, a member of American Heritage Girls Troop MD0413, out of St. Louis in Clarksville.
“It’s also a chance to have friends of the same religion, and we talk about religion with each other,” she added.
Pellegrino and other American Heritage Girls, Girls Scouts and Boy Scouts from across the archdiocese gathered May 17 at Our Lady of Perpetual Help in Ellicott City for the annual Scout Mass, celebrated by Archbishop William E. Lori.
In his homily, the archbishop lauded Scouting for encouraging young people to “be physically fit, to take care of yourself, to develop your talents,” and to “become a good, honest, virtuous person.”
Especially through Scouting connected to the archdiocese, Archbishop Lori said, “Christ is instructing young people like you, just like he instructed the Apostles.”
He added that Scouting is a kind of “formation” that may open the door to another calling.
“Please start thinking and praying about your vocation,” the archbishop told the Scouts. “Maybe, I hope and pray…some of you will become priests or join religious life.”

It may have seemed like a lot to ask of the some of the younger Cub Scouts or American Heritage Girls, but Archbishop Lori insisted otherwise.
“I was in elementary school when I realized God wanted me to become a priest,” he said.
With these weighty matters in the background, Scouts enjoy fun and fellowship.
Stephanie Frank has three children currently participating in Scouting through St. Louis – two boys in Cub Scouts and a girl in American Heritage Girls. The boys, Luke and John, earned their Parvuli Dei (children of God) religious emblems.
“The boys are a year apart, in third and fourth grade, so there was some competition there,” Frank said.
However, she added, a Parvuli Dei activity called “Treasure Chest” required family members to write on pieces of paper what they liked best about each other.
“The boys said to each other, ‘Wow, you really think that?’” Frank remembered.

Her daughter, Emma, a seventh-grader, earned her Mary, the First Disciple, emblem.

“It was really neat to work on that as a mother and daughter together,” Frank said, adding that they had visited the National Shrine of the Basilica of the Assumption of the Blessed Virgin Mary together as part of a mother-daughter group trip.
Seventeen-year-old Theresa Arlinghaus also earned the Mary, the First Disciple, emblem.

“I like how I can take a break from public school and come and be surrounded by a lot of young girls in the faith,” she said.

As the oldest girl in the American Heritage Girls troop of St. Louis, Arlinghaus notes that “you have to understand how much of a role model you have to be to the younger girls, especially when it comes to faith.”
Youth from 65 parishes and 81 Scouting Units were recognized at the Scout Mass for earning a total of 302 religious emblems in 2014.
Adult Scout leaders also earned recognition. Monsignor Thomas L. Phillips, who is pastor of St. Gabriel in Woodlawn and serves as chaplain of the archdiocesan Catholic Committee on Scouting, accepted a Quality Diocese Award, given by the National Catholic Committee on Scouting.
Maria Esquela, who headed up planning for the Scout Mass and volunteered on committees for the A Scout is Reverent Interfaith Retreat and other Scouting initiatives, earned the St. George Emblem, awarded to individuals who “have made significant and outstanding contributions to the spiritual development of Catholic youths through Scouting.”
She was also presented with the Shofar Award by Rabbi Rachmiel Tobesman, who noted that Escuela was “instrumental” in making sure that Jewish Scouts at the interfaith retreat, held May 1-3, were properly respected, provided with Kosher foods, and given opportunity to repeat the activities they missed due to Sabbath obligations.
“This is the highest award we can offer,” Rabbi Tobesman said.