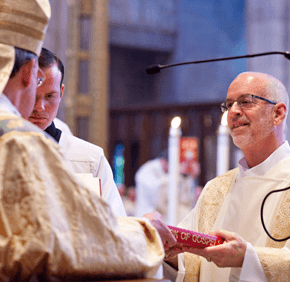 By Elizabeth Lowe
elowe@CatholicReview.org
Twitter: @ReviewLowe
A weekend retreat Mark Loepker attended a decade ago was a turning point in his faith journey.
“That took the hidden veiled call away and I came face to face with the call that weekend, that Jesus wanted a little bit more out of me,” said Loepker, 59, director of the national information assurance partnership for the National Security Agency and a retired lieutenant colonel for the U.S. Air Force. “That churned around in me for a couple of years.”
A few years later, one of Loepker’s daughters told him he would make a good deacon, which he calls his “last awakening.”
Loepker was one of 16 men ordained to the permanent diaconate by Archbishop William E. Lori during a two-and-a-half-hour Mass May 11 at the Cathedral of Mary Our Queen in Homeland.
To view a slideshow of the event, navigate the arrows below.
Interested in purchasing any of these photos? Click here.
Family members and friends of the men packed the cathedral for the long-awaited and joyous celebration. The newly ordained deacons make up the largest class of deacons for the Archdiocese of Baltimore since 18 were ordained in 2003.
Hailing from as far west as Hancock, the men represent a variety of professional and personal backgrounds.
All but one is married and they include an electrical engineer, fiscal management analyst, science professor and museum executive director.
In addition to Deacon Loepker, the new permanent deacons are:
Deacon German E. Flores, Deacon Jose L. Gabin, Deacon Allen R. Greene,
Deacon Sean P. Keller, Deacon George S. Krause Jr., Deacon Kevin Kulesa,
Deacon David J. Ludwikoski, Deacon James L. Mason, Deacon James M. Nuzzo,
Deacon Vito S. Piazza Sr., Deacon David A. Roling, Deacon Frank A. Sarro,
Deacon Robert K. Smith, Deacon Patrick E. Woods and Deacon George C. Wunderlich.
During their formation, the men completed a one-year aspirancy program, followed by three years of human, spiritual, intellectual and pastoral formation.
The academic theological program was taught primarily by faculty from St. Mary’s Seminary and University in Roland Park, with deacons taking courses in subjects including Scripture, church history, Catholic social teaching, canon law, morality and homiletics.
As part of their formation, the men served one year at a parish and one year in an institution, such as a hospital or prison.
A deacon receives the sacrament of holy orders and becomes a member of the clergy. A deacon’s regular duties include proclaiming the Gospel at Mass and delivering homilies. In addition, he administers the sacrament of baptism and witnesses marriages. A deacon may also preside at rites of Christian burial, at eucharistic exposition and benediction, the celebration of the Liturgy of the Hours and other liturgical rites. Deacons also are active in Christian outreach – ministering in a variety of roles, including within parishes, charitable agencies, hospitals and prisons.
In his homily, Archbishop Lori told the deacons “you are called to be good servants of the Lord and enthusiastic agents of the new evangelization.”
“Continue to study the Scriptures,” the archbishop said, “be ever more aware of their inherent meaning. Pray and live the words you proclaim.”
Archbishop Lori instructed the newly ordained deacons to “pray, proclaim, preach, evangelize.”
During the rite of ordination, the men placed their hands in those of Archbishop Lori, promising respect and obedience to the archbishop and his successors.
In an expression of their total dependence on God, they prostrated themselves on the floor as the faithful chanted the Litany of the Saints.
After the archbishop laid hands on each new deacon, the men were vested with the stole and dalmatic – signs of the office of deacon. The archbishop presented each deacon with a Book of the Gospels. He extended the kiss of peace, an action repeated by priests and other deacons.
Deacon Loepker was vested by his nephew, Father David Hasser, vocations director for the Diocese of Lafayette in Indiana.
“It is very meaningful to have him vest me,” said Deacon Loepker, who was visibly moved during the liturgy. “Tears of apprehension went to tears of joy.”
Deacon Loepker’s wife, Sandy, said it’s been a long journey.
“It’s been wonderful,” she said. “Having everybody together at this ceremony has been lovely.”
Emotions also ran high for Deacon David Ludwikoski.
“I can’t remember how many times I cried from the time I walked in to the end,” he said. “It’s tears of joy.”
Deacon Robert Smith felt “wonderful” and “calm” after the liturgy.
“I didn’t realize I would feel as emotional as I did,” he said. “It (the liturgy) was very moving and beautiful.”
“This is such a lovely beginning,” said Deacon Smith’s wife, Sally.
“I’m excited,” said their oldest daughter, Carolyn Ann, 13. “He’s been wanting to do this. This is good.”
Assignments for the new deacons have not yet officially been announced.
For more articles on vocations, click here.
Copyright (c) May 13, 2013 CatholicReview.org
PrevNext