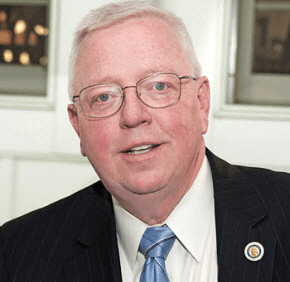 By Catholic Review Staff
Mount St. Mary’s University President Thomas H. Powell announced May 14 he is stepping down as the leader of the Emmitsburg institution, effective at the conclusion of the 2013-14 school year.
“As I finish 10 years as the president of Mount St. Mary’s University, I have spent considerable time reflecting on my work with you and the future of our university,” Powell wrote in a letter to the Mount community. “Like any position, the presidency of a university goes through seasons of beginning, developing and ending, and then beginning again. It is clear to me that the season of change is here. As a university, we are in a good place to welcome a new president to take the helm and continue moving our beloved Mount forward.”
President Powell was appointed the Mount’s 24th president in 2003.
During his tenure, the university has experienced growth and success, according to information from the Mount. In recent years, the university achieved record-breaking student enrollment, the renovation of campus facilities and the construction of the new residence hall.
In 2008, the university celebrated its bicentennial and recently completed the largest capital campaign in its history, according to information from the Mount. President Powell led the Mount’s designation change from college to university status and an academic reorganization.
The university continues to grow its undergraduate and graduate programs, and the Veritas Program common curriculum and Institute for Leadership are recognized as national models in a liberal arts education, according to information from the Mount.
“The board of trustees is unanimous in its support and admiration of President Powell and all he has accomplished,” said Board of Trustees Chairman Eugene M. Waldron Jr. in a statement. “His leadership, and the momentum we have achieved in our effort to strengthen the Mount, have set a great trajectory for future success. I know I speak on behalf of the entire Mount community in thanking he and his wife, Irene, for their years of service.”
A comprehensive national search will begin in June for the Mount’s 25th president, led by trustee Scott Wilfong and a search committee of trustees, faculty, staff, administrators, students and alumni, the university has announced.
“The 2013-14 academic year promises to be busy and productive as we continue several critical campus projects, prepare for university and (Mount St. Mary’s) Seminary national accreditations, and continue the many objectives outlined in our new strategic plan,” said President Powell in a statement. “Our next president will see a campus actively engaged in developing and implementing programs to enhance the national reputation of the Mount.”
Also see:
Master the moment, archbishop tells Mount graduates
National Shrine Grotto of Lourdes visitor center dedicated
May 14, 2013 CatholicReview.org
PrevNext