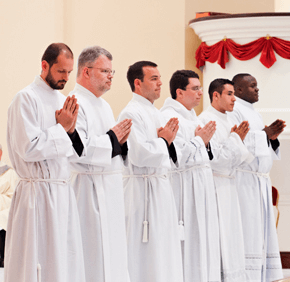 By Elizabeth Lowe
elowe@CatholicReview.org
Twitter: @ReviewLowe
James Boric was struck by the grin on his best friend’s face as he watched Father Patrick Peach walk down the aisle at St. Joseph in Fullerton to celebrate his first Mass in 2006.
“You could see how happy he was,” said Boric, 34. “It was like something hit me and I heard in my heart God say ‘this is what you were searching for.’ It was as clear as day.”
It was then that Boric, who was working at Agora Financial in Baltimore, began discerning his vocation to the priesthood.
Boric was one of six men ordained to the transitional diaconate by Baltimore Archbishop William E. Lori during a two-hour Mass May 18 at the Basilica of the National Shrine of the Assumption of the Blessed Virgin Mary in Baltimore.
Family members and friends of the men packed the basilica for the liturgy.
To view a slide show of the ordination, navigate the arrows below.
Interested in purchasing any of these photos? Click here.
Their ordination as transitional deacons is one of their final steps before being ordained to the priesthood.
The newly ordained deacons make up the largest class of men who expect to be ordained to the priesthood for the Archdiocese of Baltimore since seven were ordained in 2006.
“All I want to do is be God’s instrument and to have him work through me in the capacity that he wants to,” Boric said. “There’s a strong sense of you know you’re not worthy but there’s an excitement.”
In addition to Deacon Boric, the new transitional deacons are: Deacon Ross Edward (Ned) Conklin Jr., Deacon Andrew DeFusco, Deacon Joseph Langan, Deacon Carlos Osorio and Deacon Canisius Tah.
A deacon receives the sacrament of holy orders and becomes a member of the clergy. A deacon’s regular duties include proclaiming the Gospel at Mass and delivering homilies. In addition, he administers the sacrament of baptism and witnesses weddings. A deacon may also preside at rites of Christian burial, at eucharistic exposition and benediction, the celebration of the Liturgy of the Hours and other liturgical rites. Deacons also are active in Christian outreach – ministering in a variety of roles, including within parishes, charitable agencies, hospitals and prisons.
In his homily, Archbishop Lori told the deacons “the faithful of this local church and beyond have been praying fervently for vocations to the priesthood.”
“You are the living answers to the prayers of God’s people and you are ordained to the diaconate on the eve of the solemnity of Pentecost,” the archbishop said. “You will preach your first homilies this afternoon and tomorrow as the church relives and celebrates that day when the Holy Spirit came down upon the apostles.”
He continued, “Your witness to Christ and to his teaching must reach beyond the walls of the church and it must reach those who no longer practice the faith and those who are searching for God.”
During the liturgy, the men placed their hands in those of Archbishop Lori, promising respect and obedience to the archbishop and his successors.
In an expression of their total dependence on God, they prostrated themselves on the floor as the faithful chanted the Litany of the Saints.
After the archbishop laid hands on each new deacon, the men were vested with the stole and dalmatic – signs of the office of deacon. The archbishop presented each deacon with a Book of the Gospels. He extended the kiss of peace, an action repeated by priests and other deacons.
After the liturgy, Deacon Boric could not stop grinning.
“It was the most peace I ever felt in my life,” he said. “I’m thrilled.”
Deacon Boric was vested by Monsignor James P. Farmer, pastor of St. John in Westminster.
“His faith is visible,” Monsignor Farmer said of Deacon Boric. “He’s continually talking about Jesus in a very personal way.”
“This still feels very surreal,” said Deacon Langan, 27, who was overcome with emotion after Mass. “It’s going to take a while to sink in.”
He continued, “This ministry – it’s not something I’m worthy of. I pray that I can be faithful and fruitful.”
Deacon Conklin first realized his call to the priesthood at age 8. Forty years later, he is one step closer to being ordained a priest.
“If anybody thinks they have a vocation, pursue it,” he urged.
Assignments for the new deacons have not yet officially been announced.
Also see:
Sixteen men ordained as permanent deacons
Copyright (c) May 20, 2013 CatholicReview.org
PrevNext