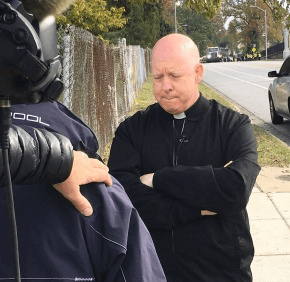 By Erik Zygmont
ezygmont@CatholicReview.org
Twitter: @ReviewErik
A school bus collided with a commuter bus early Nov. 1 in front of St. Joseph’s Passionist Monastery Parish in Irvington, killing six and sending 10 to the hospital.

Father Michael Murphy, pastor of St. Joseph’s, said he was in the rectory when he heard a “loud thump” at approximately 6:20 a.m.

According to Baltimore City police, the accident occurred on Frederick Avenue near Monastery Avenue. Father Murphy said it happened between the church building and rectory, but closer to the rectory.

Police say the school bus, which had no children on board, was traveling east on Frederick Avenue when it first struck a Ford Mustang, then a pillar at the Loudon Park Cemetery. It moved into oncoming traffic and struck the driver’s side of the Maryland Transit Administration bus, which had approximately 13 people on board, including the driver.

Father Murphy said that a Mass for All Saints’ Day scheduled for 8 a.m. was delayed about 20 minutes. During the Prayers of the Faithful, the congregation prayed for the injured and deceased victims of the crash, as well as the police and firefighters who responded and were, at that time, continuing to work at the scene.

At Mount St. Joseph High School, several blocks west of the parish on Frederick Avenue, the sound of helicopters alerted faculty and staff that something was wrong. The school also offered an 8 a.m. Mass for All Saints’ Day; according to David Norton, the principal, more than 200 attended.

“We announced what happened and prayed for all involved,” he said. “The overall reaction is one of concern and prayer for the victims.”

Norton confirmed that the injured include a female employee of Unidine, the cafeteria service used by Mount St. Joseph.

The police have not yet established a cause for the accident, though a spokesperson reportedly noted that the lack of skid marks pointed to something “catastrophic” having occurred.

According to Father Murphy, who also said he had no idea how the accident occurred, that stretch of Frederick Avenue can be dangerous.

“Making a left or right off Frederick onto Morley (Street), you’re taking your life into your hands,” he said. “It’s a major concern for people who live around here.”