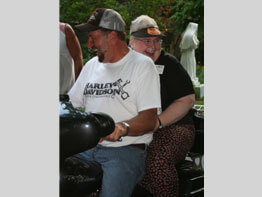 “We’re part of a gang,” the sisters laughed over coffee. They belong to the Sisters of the MMG (Muskegon Motorcycle Gang).

When the Harley-Davidson 100th anniversary celebration rolled around in 2003, someone at St. Joan Antida High School, the all-girls high school on Milwaukee’s south side sponsored by the order, suggested that the sisters open their grounds to Harley riders looking for a place to rest their heads during the festivities. The Muskegon Motorcycle Gang from Michigan took the sisters up on their offer.

“It was a bit scary,” said Sister Ann Josepha Lencioni of the decision. “But the sisters pulled together and felt it would be a good thing for Milwaukee.”

For the riders, some of whom had never interacted with a Catholic sister before, the feeling was mutual.

“It wasn’t that we were scared; we just wanted to make the nuns as comfortable as possible,” said Mike Ankeny of the group, which signed contracts to follow a few house rules such as no smoking indoors. “We’re a good mix, even though we’re on different parts of the tree.”

As Harley upon Harley made its way through the wooded driveway to the Bethany Retreat Center on Milwaukee’s northwest side, the riders and sisters wondered just what they had gotten into as they recalled the stereotypes of Catholic nuns and biker gangs.

“I was a little nervous,” said rider Patty Matuzeski. “We didn’t know what to expect – but it was so much more than we ever could have imagined.”

Within five minutes of their arrival, Sister Ann Josepha said, any apprehension experienced by the two groups had faded. Over the next few days, the riders and sisters were dining with each other, cracking jokes and taking rides on the group’s bikes.

“They are such incredible people who are concerned about and love the sisters,” said Toni Vitrano, director of communications for the order. “Professional people – they’re not Hell’s Angels, just a group of people that love motorcycles.”

While some of the riders are Catholic, others are not, but it is no matter when it comes to the impact the sisters have on the MMG, as evidenced in their exit surveys after the 100th anniversary.

“As someone not raised in a religious environment, after staying with all of you and getting to know all of the sisters I feel a few steps closer to God!” wrote one participant.

After bestowing on them the title Sisters of the MMG and bidding the sisters farewell in 2003, the unlikely friends stayed in touch, writing Christmas cards and e-mails. As bikers rolled into Milwaukee Aug. 30-Sept. 1 for the 105th Harley-Davidson anniversary, the MMG found their way back to the sisters for another weekend of fun and fellowship.

“Hospitality is very important to our community,” said Sister Theresa Rozga of their ministry to the riders, which included preparing a daily complimentary breakfast and offering snacks, soda and beer throughout the day. “We have the opportunity to offer them hospitality and to share what we have been given with them.”

The sisters, who hold their faith as dearly as the Harley riders hold their bikes, only had one piece of advice for their friends as they returned to Michigan at the conclusion of the weekend: “Ride nice. Pray hard.”