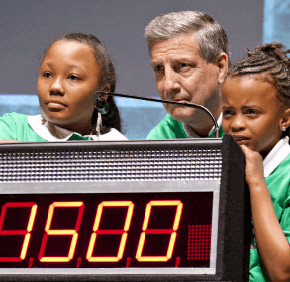 TOWSON – What animal can go from 0 to 60 mph in three seconds? What are the three primary colors? True or false, is limestone the softest stone? (See answers at bottom).

These were some of the 50 questions fired at eight sixth-graders and four local celebrities Oct. 13 at Sisters Academy of Baltimore’s “Are You Smarter Than a 6th Grader?” fundraiser at Goucher College.

The event raised money for Sisters Academy, a tuition-free school, sponsored by the School Sisters of Notre Dame and three other congregations, which serves girls from low-income neighborhoods in grades 5-8.

Fashioned after the TV quiz shows “Are You Smarter Than a 5th Grader?” and “Jeopardy!,” four teams of three – two students and a celebrity – tested their knowledge of language arts, math, music and art, science and social studies.

“It brings together people who have supported us as well as features what we’re all about – the education of children,” said School Sister of Notre Dame Delia Dowling, president of Sisters Academy, who noted school officials wanted to organize an event “that involved our students and demonstrates their gifts.”

“The girls work hard all the time, so the best preparation is being a good student every day,” said Sister Delia, who added the school organized a similar event in 2010.

Fifty-nine students are currently enrolled at the school, which opened in 2004. In June, all students in the school’s first graduating class, the Class of 2008, earned high school diplomas.

The friendly competition was spirited as the teams, wearing florescent green, pink, orange and yellow T-shirts, answered two rounds of questions, which ranged from 100 to 500 points each.

The contestants eagerly pressed their buzzers to answer the questions – regardless of whether they answered correctly.

The host was comic and media critic Bill McCuddy.

Grand Central Cortex won with 5,100 points; Los Lobe-os came in second with 3,300 points; Kid Cranium was third with 2,800 points; and Lady Cerebellum was fourth with 2,500 points.

“Those girls put a lot into the school and they really do get a lot out, besides academics,” Conneely said. “I was very honored to be a part of the event.”

Alyssa Potts-Goodman said the event was fun, even though her team won second place.

“It was very fun, you get to learn new things,” Alyssa said.

The answers to the questions above are the cheetah; blue, red and yellow; and false, limestone is not the softest stone.