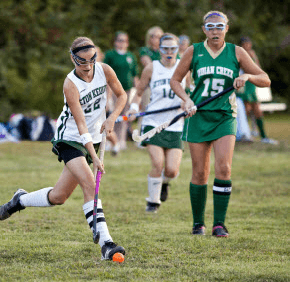 By Elizabeth Lowe
elowe@CatholicReview.org
Anna Stumme is a standout in the classroom and on the sports field, but her true passion is building things – particularly in the kitchen.
Early in her high school experience, Stumme, a senior at The Seton Keough High School in Baltimore, got hooked on the reality TV show “Cake Boss,” and decided to start baking cakes. She has made at least a dozen cakes for birthdays and other celebrations, such as a baby shower and a wedding, in the past three years.
“I’ve always liked building,” said Stumme, 16. “It’s really hands-on.”
It should come as no surprise that her favorite classes are math and science, as she plans to major in engineering in college. Stumme, who has a 3.98 GPA, has applied to The Catholic University of America in Washington, D.C., her first choice.
She is enrolled in Seton Keough’s engineering program, takes advanced placement and honors courses and is a National Honor Society member.
Stumme is a three-sport athlete, playing field hockey in the fall, joining the swim team in the winter and playing lacrosse in the spring. She played basketball at Seton Keough her freshman year.
Stumme is a midfielder in both field hockey and lacrosse. During the summer months, she played on club field hockey and lacrosse teams. She was an Interscholastic Athletic Association of Maryland B Conference all-star in field hockey in 2010, but calls lacrosse, which she began playing in elementary school, her favorite sport.
“When I was younger I didn’t like sitting still,” Stumme said. “It (lacrosse) is definitely the fastest of all the sports.”
When each sport is in season, she has practice Monday through Friday with meets and games during the week and sometimes on Saturdays.
If she enrolls at Catholic University, she plans to play on the school’s field hockey and lacrosse teams.
A graduate of Monsignor Slade Catholic School and parishioner of Holy Trinity, both in Glen Burnie, Stumme has been an altar server, lector and volunteer for Vacation Bible School and Sunday school.
“It’s been a part of my life ever since I was a baby,” Stumme said of her faith.
At Seton Keough, Stumme volunteers as a student ambassador and at summer sports camps at the school.
Angela Calamari, Seton Keough’s principal, described Stumme as “faith-filled and kind.”
“She always does her best, she’s a great leader and role model,” Calamari said. “I can’t really say enough about her. She’s a blessing to our school.”
Josiah LaTona, athletic director and assistant principal at Seton Keough, called Stumme “a sweetheart.”
“She’s a good person, a genuine person,” LaTona said. “Being around sports for years, when you have a really good kid, a really good player, you wish your school was full of Anna Stummes.”
Copyright (c) Oct. 17, 2012 CatholicReview.org
PrevNext