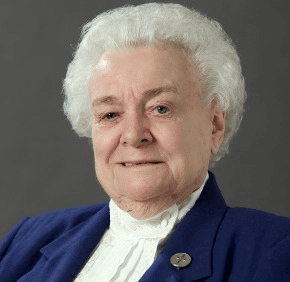 Ministering mainly in administration, Sister Cordelia was assigned to the business office of the former Mount St. Agnes College in Baltimore the day following her first profession of vows.

Later, she ministered at Mercy Medical Center in Baltimore in various positions, including as the hospital’s internal auditor for 21 years.

While she had little direct contact with patients, an obituary prepared by her congregation notes, Sister Cordelia believed she was carrying out the charism of Venerable Catherine McCauley, the Mercy Sisters’ foundress, by “caring for the poor in a dollars and cents role.”

The obituary noted that many who were unable to pay their bills to Mercy Medical Center were helped by the hospital’s charity write-offs, and Sister Cordelia was grateful to be a small part of that ministry.

She was also remembered for her prayer life, maintaining a schedule similar to the one she had learned during her formation, and for the joy she found living in community.

Sister Cordelia was a Sister of Mercy for 63 years.