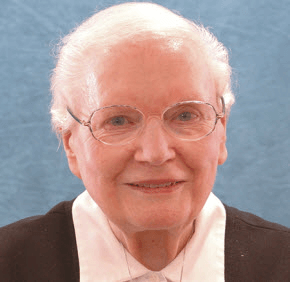 By Catholic Review Staff
A funeral Mass for Sister of St. Francis of Philadelphia Martha Joseph Rooney will be offered May 9 at St. Ann Convent Chapel in Tacoma, Wash. Sister Martha Joseph died May 2. She was 91.
A native of Charleville, County Cork, Ireland, Sister Martha Joseph was a professed member of her religious order for 73 years. She entered the congregation in 1938 and professed first vows in 1941.
She taught at St. Katharine School in Baltimore from 1940 to 1944, then served at St. Francis Hospital in Trenton, N.J., from 1948 to 1949.
Sister Martha Joseph ministered in the Archdiocese of Seattle for 48 years.
She served as a supervisor, instructor, assistant administrator and director of the school of nursing at St. Joseph Hospital in Tacoma from 1949 to 1957 and 1958 to 1976.
Sister Martha Joseph served in the Diocese of Baker in Oregon from 1976 to 1986, 1987 to 1989 and 1991 to 1994. Her ministry included serving as an assistant administrator of St. Elizabeth/St. Clare Hospital in Baker City, Ore.
She served as coordinator of the health program and a volunteer coordinator of nursing service at St. Ann Convent in Tacoma from 1989 to 1991 and 1994 to 2008.
In 2008 Sister Martha Joseph moved to St. Ann Convent and served in prayer ministry until her death.
She earned a bachelor’s in nursing from The Catholic University of America in Washington, D.C., and a master’s in nursing education from St. Louis University in St. Louis, Mo.
To read more obituary articles, click here.
PrevNext