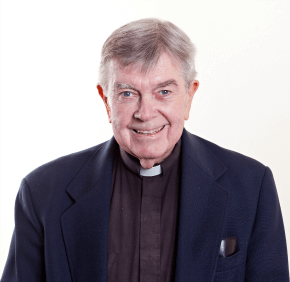 By George P. Matysek Jr.
gmatysek@CatholicReview.org
Twitter: @ReviewMatysek
When considering the suppression of parishes or the closing of church buildings, bishops should hew closely to canon law not simply because it’s a legal requirement of the church, Cardinal Raymond L. Burke said, but because it helps foster unity.
In a May 7 interview with the Catholic Review, the prefect of the Supreme Court of the Apostolic Signature, the Vatican’s highest court, said following proper procedures helps ensure legitimate decisions.
“When we don’t follow the requirements of the law, then people rightly claim that they’ve been aggrieved by this,” said Cardinal Burke, who was a featured speaker at the Eastern Regional Conference of the Canon Law Society of America, held May 6-8 at the Hotel Monaco in Baltimore. The cardinal’s presentation was closed to the media, but he granted a brief interview to the Catholic Review.
“(When) we do follow the requirements of the law,” he said, “even if we take a decision that’s unfavorable to people, at least they know that it was taken legitimately with respect to what the church requires for that decision.”
According to canon law, a bishop has the authority to suppress (close) a parish when there is a “just” reason. He must consult with his diocesan presbyteral council, and parishioners have the right to make their views heard.
Closing a church building, a process canon law refers to as relegating it to “profane, but not sordid use,” requires that a bishop have a grave reason for the closure.
Cardinal Burke noted that when discerning whether to reduce buildings to profane use, dioceses should “avoid presuppositions that are not correct,” including the notion that a parish can have only one church. It is possible for a parish to have two or more church buildings, he said. Although a parish may be suppressed, its buildings may continue to be used as part of another parish.
If a church is being closed because the parish doesn’t have the means to keep up more than one church, Cardinal Burke said, “then you have to demonstrate that, in fact, there aren’t the means there for the church to be maintained.”
The cardinal, a former bishop of La Crosse, Wis., and a former archbishop of St. Louis, added that sometimes a church is in “such a terrible state of deterioration” or has suffered some calamity that has left it so seriously damaged that it would be a burden for a parish to maintain.
“All those things simply have to be documented,” he said.
The laity plays a key role in the health of churches, Cardinal Burke said.
“Especially in this country (the United States), the existence of churches depends on the generosity of the laity,” he explained. “If the laity aren’t contributing generously, these churches can’t continue.”
Maintaining multiple churches within a single parish requires a strong commitment from the laity, he added, who are often entrusted with the maintenance and care of church buildings.
“In my own experience as a bishop, I found the lay faithful to be exemplary in this,” Cardinal Burke said. “In the first diocese I served, there were a number of these churches, and they were kept up, cared for completely by the laity and they did good work.”
Cardinal Burke said he knows no bishop “in his right mind” who would want to close a parish unnecessarily. He acknowledged that it is always “a source of a lot of suffering for the lay faithful.”
“The bishop and the priests have to provide as best they can for the spiritual needs of the parishioners with the material goods that they have available,” he said.
Bishops must be good stewards, he said, and use “prudential judgment” in how material resources can be best used. He cautioned that there shouldn’t be a prejudice against keeping church buildings open.
“The bishop needs to have before him all the factual information in order to know the best way to decide with regard to a particular church,” Cardinal Burke said.
Also see:
Archbishop Lori dedicates new church for 200-year-old Buckeystown parish
Blog: Remembering Cardinal John Joseph O’Connor
Holy gift giving: What are Vatican guests giving the pope?
PrevNext