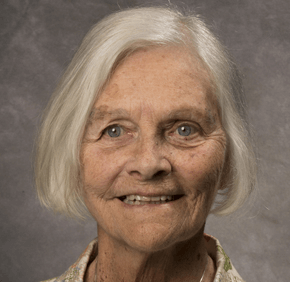 By Catholic Review Staff
A funeral Mass for School Sister of Notre Dame Marie Vincent Brothers was scheduled for June 14 in St. Louis, Mo. and a memorial Mass is scheduled for June 20 at Villa Assumpta in Towson. Sister Marie died June 8 of lymphoma. She was 86.
A native of Missouri, Sister Marie entered the School Sisters of Notre Dame in 1945 and received her religious name in honor of her youngest brother, John Vincent. She professed first vows in 1948 and final vows in 1954.
For 40 years, Sister Marie and School Sister of Notre Dame Gerold Mobley collaborated for team-teaching, art and creative design.
The majority of their partnership was spent at Notre Dame of Maryland University in Baltimore.
Sister Marie, who ministered for nearly 30 years at the university, taught art education, graphic design and was a residence hall director.
She also served in California, Maine and Missouri.
In 2011, Sister Marie retired to Villa Assumpta. In 2012, she was awarded the president’s medal for her service to Notre Dame of Maryland University.
She earned a bachelor’s in secondary education from Quincy University in Quincy, Ill. and a master’s in secondary education from DePaul University in Chicago.
Copyright (c) June 17, 2013 CatholicReview.org
PrevNext