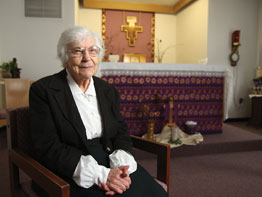 Sister Jean Clare Rohe, O.S.F., works four mornings a week as a rectory receptionist, and that, along with a ready wit and quick recall, makes it hard to believe she’s 90.

She lives, works and prays at the convent and rectory at St. Anthony of Padua, Gardenville, where she’ll be celebrating her 70th jubilee on April 12.

Sister Jean Clare entered the Sisters of St. Francis of Philadelphia in 1935 when she was a 17-year-old junior at Seton High School.

She was allowed to enter the order with her cousin and finish high school in the motherhouse. One of her sisters became a nun as well, and the pair was among six first cousins who entered the community. Today, she lives with her cousin Sister Alice Catherine Rohe at the convent.

Sister Jean Clare is the oldest of nine children; she grew up on a farm near what is now White Marsh Mall. Her vocation was sparked by the time she spent with the Sisters of St. Francis while she was a parishioner of St. Joseph, Fullerton – then in a farming community.

“Most farmers kept their children home to work the fields,” she said. “I was lucky to go to high school.” Getting there involved walking to Belair Road, taking a bus to Overlea and then two streetcars to Seton.

She taught in Wilmington, Del., for 28 years and earned a bachelor’s degree from Mount St. Mary’s University in Emmitsburg, attending classes on Saturdays and in the summer. She then earned a master’s degree in science from Morgan State University.

From 1941 to 1946 she taught at Immaculate Conception School, Towson, then at Ss. Philip and James School in Charles Village until 1955, when she went to The Catholic High School of Baltimore.

As a science teacher in the 1960s, she received grants to do more study.

“In 1966, I had one in Portland (Maine),” she recalls. “We were studying the rocky shores, and we were in long habits then. The rocks were slippery and you’d fall, and your hands would be bloody from the mollusks’ shells.”

In 1972 she started a two-year stint at Our Lady of Mount Carmel High School, Essex.

“That was enough because it was co-ed,” she said. The boys in her class drove her crazy. “I used to have all my things lined up – they were tinkerers, I tell you.”

But one student was her rescuer, she recalled with a laugh, a well-mannered young man named Mitchell T. Rozanski. That same student, now bishop of the eastern vicariate, will be the celebrant at her jubilee Mass.

She then taught in Wilmington, Del. “I was back to all girls,” she said.

She returned to Catholic High in 1983 and stayed until 1989, when she headed back to Wilmington to teach grade school.

In 2004 she ostensibly retired.

“When I got here they were advertising for someone to answer the door and phones,” she said. “I was always a doer.”

She was most affected by the reforms of Vatican II.

“That was the big upheaval, if you want to use the word,” she recalled. She feels the church thought traditions that were sacred and important to Catholics were imposed on them, “but you look at them and see the value. And when they’re gone, they’re gone.” She mourns lost traditions like May processions and Corpus Christi celebrations.

But the biggest changes were in community. “It was hard,” she said. “Some wanted to change, but others didn’t. I was always a person who took things more or less in stride.” She still remembers the moment when a younger sister announced they didn’t have to wear their veils anymore.

“The older sisters wanted to throw her out.”

She remembers other changes, too, like learning to drive. Her favorite was the microwave. “We would gather around the microwave.”

But Sister Jean Clare, an avid gardener who loves the outdoors, isn’t one to look backward. She’s heartened “by the enthusiasm our new archbishop has for vocations.”

Of her own vocation and work, she said, “I just enjoyed it all.”