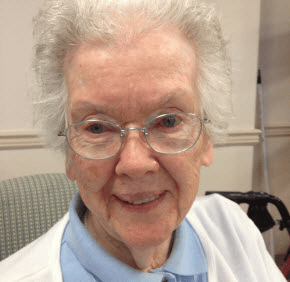 By Catholic Review Staff
A funeral Mass for Daughter of Charity Sister Jane Frances Fairley was offered Oct. 30 at the Basilica of the National Shrine of St. Elizabeth Ann Seton in Emmitsburg. Sister Jane Frances died Oct. 26. She was 91.
A native Baltimorean, Sister Jane Frances graduated from Seton High School in Baltimore in 1940. She entered the Daughters of Charity in 1944 and in 2012 celebrated 68 years as a member of the religious order.
Sister Jane Frances earned a bachelor’s in nursing from Boston College. From 1946 to 1975, she served at hospitals and medical centers in Massachusetts, New York, Virginia and Florida, then returned to Maryland.
She served at Sacred Heart Hospital in Cumberland from 1975 to 1981; at St. Ann’s Infant Home in Hyattsville from 1981 to 1986; at St. Agnes Hospital in Baltimore from 1986 to 1987; at Jenkins Memorial Home in Baltimore from 1987 to 1994; and as a gift shop assistant at the National Shrine of St. Elizabeth Ann Seton in Emmitsburg from 1994 to 1995.
Sister Jane Frances ministered to the homebound in West Virginia from 1995 to 2006. In 2006, she entered the ministry of prayer in Emmitsburg where she served until her death.
To read more obituary articles, click here.
PrevNext