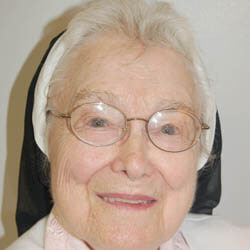 Sister Georgine Grabenstein of the Ursuline Sisters of Louisville taught in Cumberland From 1964 to 1968.

A member of her congregation for 79 years, Sister Georgine was born and raised in Cumberland, where she attended the former parish school and high school at St. Mary. From 1964 to 1968, she taught at the parish school.