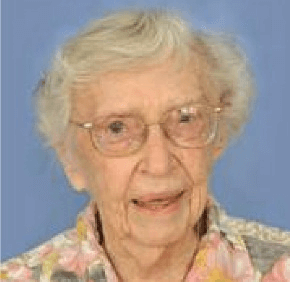 By Catholic Review Staff
A funeral Mass for Sister Francis Marie Usher of the School Sisters of Notre Dame was offered Aug. 4 at Villa Assumpta in Baltimore. Sister Francis Marie died July 28; she was 98.
A native of Baltimore, Sister Francis Marie received her first Communion at St. Ann Parish on Greenmount Avenue; she was also confirmed there by Archbishop Michael J. Curley in 1929.
When she was an eighth-grader at the parish school, she and her class participated in a Novena of Grace with the intention of knowing their vocations.
A question was read: “Is God calling you to be a nun?”
In her autobiography, Sister Francis Marie described “a sensation which passed over me.”
“It seemed that in my soul, someone had spoken those words and there was but one answer,” she wrote.
She spent the next four years at the Institute of Notre Dame Baltimore before making plans to enter the School Sisters of Notre Dame in 1936 and professing her first vows in 1939, making her a professed sister for 77 years.
In the Archdiocese of Baltimore, Sister Francis Marie taught at what is now St. Mary’s School in Annapolis from 1957 to 1960. She taught at St. John School in Westminster, where she also served as principal, from 1960 to 1966. From 1966 to 1973 and 1974 to 1976, she taught at the former Archbishop Keough High School in Baltimore.
Sister Francis Marie also ministered in education in Puerto Rico, Pittsburgh and Washington, D.C.
She earned a bachelor’s degree from College of the Sacred Heart in Santurce, Puerto Rico, and a master’s degree from Fairfield (Conn.) University, and she made advanced study at Johns Hopkins University.
In addition to education, Sister Francis Marie served in pastoral ministry at St. Benedict in Baltimore from 1976 to 1979.
For the following year, she was a health care consultant and chaplain to several Baltimore nursing homes, before returning to St. Benedict to serve as a pastoral visitor to the sick and elderly from 1980 to 1981.
She ministered to her sisters at Villa Maria in Glen Arm from 1981 to 1995, and then at Maria Health Care Center in Baltimore until 2003.
After her official retirement to Villa Assumpta, she continued to volunteer at Maria Health Care Center until 2007.
According to her fellow School Sisters of Notre Dame, Sister Francis Marie led an “exemplary and deeply spiritual life.”

She was an avid conversationalist and reader, and was remembered for her “gentle and quiet way with any and all in need.”
For more obituaries, click here.
PrevNext