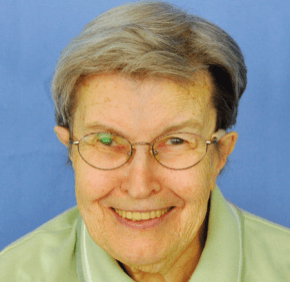 By Catholic Review Staff
A funeral Mass for School Sister of Notre Dame Eileen McFadden was offered Oct. 4 in the chapel at Villa Assumpta, home to retired School Sisters, in Baltimore. Burial followed at Villa Maria Cemetery in Glen Arm. Sister Eileen died Sept. 30. She was 86.
A native of Roxbury, Mass., Sister Eileen professed first vows in 1948.
She taught and served as a principal at Catholic schools in Florida for more than two decades before coming to Baltimore in 1968. She taught at the former parish school of St. Benedict in Baltimore from 1968 to 1973.
From 1974 to 1980 Sister Eileen taught in the Archdiocese of Washington. From 1980 to 1994 she taught English to adults and ministered to migrants and the poor in Florida.
In 1995 she returned to Baltimore and ministered at the Catonsville Emergency Food Center and to residents of Charlestown, a retirement community in Catonsville. She served as a pastoral associate at Our Lady of the Angels in Catonsville.
In 2004 she moved to Villa Assumpta and in 2012 to the adjoining Maria Health Care Center.
Sister Eileen earned a bachelor’s in education from Notre Dame of Maryland University in Baltimore and a master’s in English from Villanova University in Villanova, Pa.
PrevNext