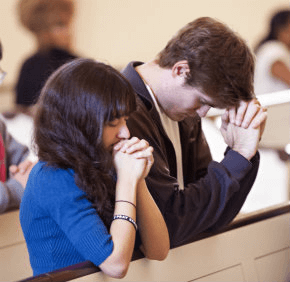 By Elizabeth Lowe
elowe@CatholicReview.org
Twitter: @ReviewLowe
As young adults establish residence in Baltimore City, some leading clergy in the archdiocese hope they will choose the Basilica of the National Shrine of the Assumption of the Blessed Virgin Mary as their spiritual home.
“Downtown Baltimore is growing exponentially,” Archbishop William E. Lori wrote in an email to the Catholic Review, “and many of the people who have moved into the area around the basilica are young adults. We wish to make them feel welcome.”
As part of that effort, the basilica began a young adult Mass on Sundays at 4:30 p.m., specifically welcoming the faithful in their 20s and 30s.
“We want the liturgy to be vibrant and inviting,” Archbishop Lori said, “and hope that an inspiring message and uplifting music will attract young people to this Mass and make them want to return. As the Mass grows, we hope more young people will want to be involved in the Mass as lectors, cantors and ushers.”
Archbishop Lori celebrated the Mass Nov. 3, which attracted a sprinkling of 20-somethings.
In his homily, he referred to God as “a lover of souls.”
“Some people think of God as a big marshmallow in the sky,” he said, “and still other folks think of God as kind of scary. They wonder if God is full of anger or wrath. God, the lover of souls, doesn’t deal with us as a number. He deals with us as individuals. He loves each soul.”
Veronica Foelber, 23, and Andrew Timmons, 22, typically worship at the Shrine of St. Alphonsus in Baltimore, but attended the Nov. 3 Mass because the timing was right.
Foelber enjoyed the archbishop’s reference to God as “a big marshmallow in the sky.”
She was excited to have the archbishop “waltz in and celebrate Mass with us.”
Foelber and Timmons, graduate students at the University of Maryland, Baltimore, and The Johns Hopkins University in Baltimore, respectively, didn’t join their peers and Archbishop Lori for fellowship at the Irish pub Mick O’Shea’s following the liturgy, but they plan to attend the Mass again.
“We hope to … have an open discussion of what’s on the minds of our young adult Catholic community,” Archbishop Lori said. “It is hoped that the faith that inspires this desire will be nurtured through the Mass and that the practice will become more regular for those looking to deepen their faith and come to know the person of Jesus more personally and more intentionally.”
Monsignor Arthur F. Valenzano serves as pastor of the basilica. To learn more about the church, visit the parish website.
Also see:
Volt Restaurant in Frederick is always a winner
Cardinal Dolan shares his Baltimore connections
PrevNext