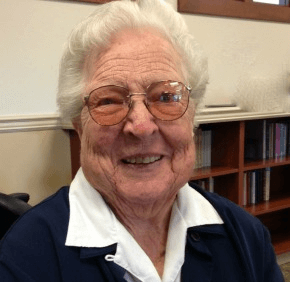 By Catholic Review Staff
A funeral Mass was offered Feb. 28 for Daughter of Charity Sister Beatrice Wise at the Basilica of the National Shrine of St. Elizabeth Ann Seton in Emmitsburg. Sister Beatrice died Feb. 26 at Villa St. Michael in Emmitsburg. She was 98.
A native Marylander, Sister Beatrice graduated from Seton High School in Baltimore in 1936, the same year she entered the Daughters of Charity of St. Vincent de Paul in Baltimore. She earned a bachelor’s degree in social studies from St. Joseph College in Emmitsburg and a master’s degree in education from The Catholic University of America in Washington, D.C.
In the Archdiocese of Baltimore, Sister Beatrice served at Our Lady of Lourdes School in Baltimore from 1963 to 1966, while also serving as local superior. She ministered at Seton High from 1979 to 1988 before beginning nearly two decades of service in parish ministry and evangelization at St. Benedict in Baltimore. She also served in Michigan, New York, Virginia and Washington, D.C.
In a 2001 interview with the Catholic Review, Sister Beatrice said she was privileged to minister to the elderly and homebound of St. Benedict, frequently visiting them in their homes.
“I almost wish I had my life to live over because it’s a blessing, a privilege,” said Sister Beatrice, who moved to Villa St. Michael in 2007. “You can’t even begin to know what it means to go out and bring a little peace and joy.”
To read more obituary articles, click here.
PrevNext