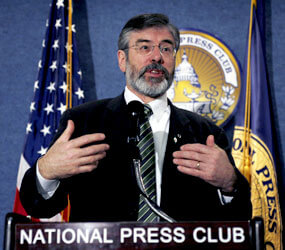 WASHINGTON – The president of the Irish political party Sinn Fein said the recent attacks in Northern Ireland are a human tragedy but the facts of the events should not be exaggerated.

Calling the murders of two young British soldiers and a policeman in Northern Ireland a “full-frontal assault on the peace process,” Gerry Adams told journalists in Washington March 16 the “vast majority” of Irish condemned the killings and “were afraid of the situation slipping back” into violence.

“Do not minimize what occurred but do not exaggerate what occurred,” he said. The violence came from “very small groups of people. That’s the fact. That is the truth of it.”

Sinn Fein, a predominantly Catholic party that supports a unified Ireland without British rule, is “just as much a target” by dissident groups as anyone else, he said.

A group calling itself the Continuity IRA claimed responsibility for the policeman’s killing March 9, while a group known as the Real IRA claimed responsibility for the killing of two soldiers March 7. Both groups have broken away from Northern Ireland’s largest paramilitary organization, the Irish Republican Army, which has embraced Northern Ireland’s peace process since the late 1990s. Sinn Fein, whose members are represented in the legislatures of Ireland and Northern Ireland, is the political arm of the IRA.

“The British government has to resist any temptation to the practices of the past” and there must be due process and accountability “as opposed to unaccountable nameless groups,” Mr. Adams said.

The largest gain from the peace process in Northern Ireland is “that we have local, accountable politicians,” Mr. Adams said.

When asked if the global economic crisis had a part in the recent attacks in Northern Ireland, Adams said “there is a lack of (government) leadership” regarding the economy, and this has had an effect on citizens. Lower- and middle-income families feel punished while the wealthy are surviving, and “that is not the Ireland we want,” he said.

Mr. Adams, who was to meet with U.S. Secretary of State Hillary Rodham Clinton March 17, noted the important relationship between Ireland and “Irish America.”