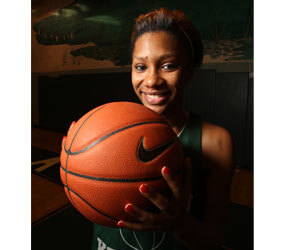 Singletary saw a joyously tearful Boswell and smiled, before jumping in the air to celebrate the title.

“I hope we have many more of those moments before she graduates,” Boswell said of her junior guard.

“I can’t explain the feeling,” Singletary said of winning the championship. “It’s seeing everybody happy and you remember how hard it was to get there. There are a whole bunch of emotions and then you just end up crying.”

The current Gators are young, with three sophomores, six juniors and three seniors. Still, Boswell believes her team is as talented as any in the conference.

Boswell named Singletary a captain of the team this year and the guard hasn’t disappointed.

Through games of Dec. 17, Singletary was closing in on the 500-point career mark, and Boswell believes she could flirt with the 1,000-point plateau by the end of her senior season. This season, Singletary is averaging about 12 points, six rebounds and two assists

“She is going to play the best player they (the opposition) have every game,” Boswell said.

“I won’t let them make me adjust,” she said of opposing players.

Singletary is already being hotly pursued by college basketball programs like Villanova University, the University of South Carolina, Loyola University Maryland, University of Maryland Baltimore County and others.

Singletary has stepped up in the classroom, as she earned a 3.4 grade point average in the first marking quarted this year. She found that she excels in both math and science courses.

“I could have been doing this the whole time,” Singletary said of her recent academic success. “When I’m sitting around waiting for practice, I’m studying rather than sleeping or eating. It makes a difference.”