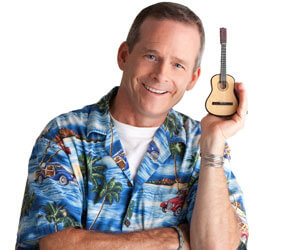 WASHINGTON – Don’t look now, but Soeur Sourire and others like her are getting their due from Catholic children’s music artist Jim Cosgrove.

“I look at my own upbringing, I’m the baby in a family of eight, an Irish Catholic family,” Cosgrove told Catholic News Service in a Jan. 28 telephone interview from his home in the suburbs of Kansas City, Kan. “We grew up in the early Seventies with all of these singing-nun records – plus 17 years of Catholic education, which included several singing nuns along the way. We would hang around the living room and sing along to these records,” he said.

A Belgian Dominican, Soeur Sourire was, to American audiences, “the” Singing Nun, whose French-language song “Dominique” became an international hit in 1963. Many other sisters followed suit in the ensuing years as the Second Vatican Council’s liturgical reforms permitted Mass in the vernacular, and nuns were among those writing and singing songs for the new liturgy.

“We also listened to Mitch Miller records, and Pete Seeger,” Cosgrove recalled. “My brothers and sisters turned me on to their records, the rock ‘n’ roll – the Who, the Beatles and (Rolling) Stones. Really, it continues to mold my desire to provide just good-quality family entertainment, and entertainment that is also enjoyable to parents for the most part.”

Cosgrove, with seven CDs to his credit – including his latest, “Swimming in Noodles” – has achieved enough success in the field of children’s music to be able to make a living from it for the past decade – albeit not without some hand-wringing.

“I feel like the more leaps of faith you take, the easier it gets,” Cosgrove told CNS. “I’ve been blessed to find a wife who likes that. I remember in 2001, I was already playing and she booked a couple of shows, and that’s how we met. She was ready to join me on this journey.”

He added, “About a year into our marriage, she said, ‘I’m getting tired of you going on the road without me. I’d like to go with you.’ So she quit her job and came out with me. She had the support of her parents, and my mother. (Cosgrove’s father is deceased.) My brother is our business manager, so he was behind us as well.

“A month after she quit her job, she found she was pregnant. But we’ve made it work, and we continue to make it work,” he continued. “We’re together almost all the time. People ask, ‘How do you make it work? How can you stand to be with each other all the time?’ Not only do we love each other, but we like each other.”

Their children, now ages 6 and 3, are home-schooled and join the Cosgroves on the road on occasion. The longest such road trip, though, was three weeks, and Cosgrove acknowledged it wasn’t always possible to find a central location for several days’ worth of concert dates.

But when the family is home in Kansas City, “my wife and I have worked really hard on this the last decade to create kind of a scene, a family music scene,” Cosgrove said.

In earlier years, they organized a series of Family Peace Jamborees, with local talent. In recent years, though, it has blossomed into the Kansas City Jiggle Jam, which attracts upward of 30,000 people over two days, thanks to such big-name draws in the business as Dan Zanes, They Might Be Giants, Trout Fishing in America, Tom Chapin and John McCutcheon – and ticket prices as low as $8.

Cosgrove’s youthful audiences often refer to him with a nickname derived from a song on his first album: “Mr. Stinky Feet.”