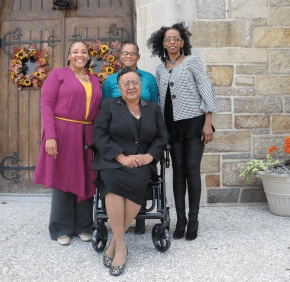 By Erik Zygmont
ezygmont@CatholicReview.org
At St. Ambrose,you don’t need to hear the music to dance.
The Park Heights parish’s three-piece band – including drum kit – and exuberant choir create more than enough structural vibration and visual stimulus to awaken Karen Grays’ sense of rhythm, and the deaf woman in the front pew sways and claps with the rest of the congregation while Paula Langford interprets the lyrics for her in American Sign Language.
“We try to make sure she has what she needs so she can participate in her faith,” said Langford, who is joined in sign ministry (called deaf ministry when the signers are deaf, she said) by her mother, Augustine Stith, and fellow parishioner Konnie Pelletier.
Throughout Mass, the three women alternate in their signing duties, interpreting readings, prayers and Capuchin Franciscan Father Paul Zaborowski’s homily for Grays.
The signs for a few words quickly become obvious, easily identified through timing and context. Every time Father Zaborowski, the pastor, says “Jesus,” for example, Langford taps the palm of her open hand with the middle finger of the other hand, signifying the nails of the crucifixion.
It becomes clear, however, that signing is not simply a word-for-word substitution for speech.
On Oct. 25, Langford interpreted Mark’s telling of the healing of blind Bartimaeus, a story which includes dialogue from Jesus, his disciples and the blind man himself. As the Gospel words were read, Langford’s eyes narrowed in concentration before, like a skilled actor in a one-person show, she supplemented her hand signs with the distinct facial expressions and body languages of the three parties.
“You don’t interpret what the reading is,” Pelletier explained later. “You interpret what it means, so (Grays) can understand it.”
The interpreters, then, must have a solid grip on Scripture. Unsurprisingly, Pelletier, Langford and Stith report that their commitment to clarity for Grays has strengthened their own knowledge of the Gospel and enhanced their experience of the word.
“Signing makes it prettier,” Langford opined. “It makes it more alive.”
Stith and Langford learned sign first, followed by Pelletier. Stith said that she was recruited by Josephite Father William Norvel, then-pastor of St. Francis Xavier in Baltimore, the women’s former parish, to learn to sign specifically for Grays.
“It helps all of us,” she said. “The parishioners (at St. Ambrose) are trying to do signs. Sometimes I look up at the deacon and he’s doing signs.”
Grays, who works for the Social Security Administration, suffered a high fever at 10 months and lost most of her hearing. A member of the Catholic Daughters, she is also an altar server at St. Ambrose.
“When there’s a reading, Konnie goes behind the priest and interprets while Karen holds the book for him,” Langford explained.
While Grays is currently the only deaf parishioner at St. Ambrose, the church sometimes attracts visitors who have heard about the ministry, which is fulfilling for all involved.
“We love Karen,” Pelletier said.
“And I love all of you,” Grays replied in sign.
See also:
Archbishop Lori gives preaching skills a workout at Bethel A.M.E.