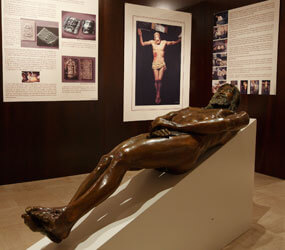 VATICAN CITY – The Shroud of Turin, which many Christians believe to be the burial cloth of Jesus, goes on public display this spring, at a time when experts are debating new claims about the 14-foot-long piece of linen.

Pope Benedict XVI has already made plans to view the shroud during a one-day trip to the northern Italian city of Turin in early May. Many observers are wondering how the pope will refer to the cloth: as a sign, an icon or – as Pope John Paul II once characterized it – a relic.

The shroud’s last showing was 10 years ago, when more than a million people lined up to see it in the cathedral of Turin in northern Italy. Officials are predicting similar crowds for the exposition April 10-May 23, and visitors are being urged to book their visits online at https://www.sindone.org.

The pilgrims come to witness with their own eyes what they may have read about or glimpsed on TV. Most go away impressed with what they see: a faint image of a bearded man who appears to have been whipped, crowned with thorns and crucified.

Carbon-14 tests in 1988 dated the cloth to the Middle Ages, and seemed to confirm the theory that the shroud was a pious fraud. But since then, some experts have faulted the methodology of the testing, and said the tiny samples used may have been taken from areas of the cloth that were mended in medieval times.

The shroud has also been chemically analyzed, electronically enhanced and computer-imaged. So far, no one has been able to fully explain how the image was transferred to the linen cloth, although experts have put forward theories ranging from enzyme reaction to solar imaging.

The shroud has been studied from virtually every scientific angle in recent years. Its weave has been examined, pollen grains embedded in the cloth have been inspected, and red stains have been analyzed for hemoglobin properties. One particular sub-category of debate focuses on enhanced images that, in the opinion of some scientists, reveal the impression of 1st-century Palestinian coins placed on the eyes of the shroud’s figure.

The “jury” on the shroud includes hundreds of experts, some of them self-appointed. They do not split neatly into believers and skeptics, however. The latest controversy, in fact, involves a Vatican archivist who claims to have found evidence of writing on the shroud – a hypothesis that has drawn sharp criticism from other Catholic scholars.

The archivist, Barbara Frale, said in a new book that older photographs of the shroud reveal indications of what was essentially a written death notice for a “Jesus Nazarene.” The text, she said, employs three languages used in 1st-century Jerusalem.

The book immediately prompted a Web site war in Italy. Several sites dedicated to the shroud ridiculed Frale’s hypothesis, saying it bordered on Dan Brown-style fantasy. Vatican Radio, however, featured an interview with Frale about her “important discovery.” No doubt the world will hear more about this scholarly spat when the shroud goes on display.

It will be the first public showing of the shroud since it underwent a restoration in 2002, which removed repair patches and a large piece of linen of a later date. To prepare for the exhibit, the Archdiocese of Turin has taken the unusual step of closing the cathedral for three months. It will take that long to set up the viewing area and the informational exhibit for visitors as they wait in line.

Pope Benedict’s arrival is a big event for organizers of this year’s shroud exposition. Many Catholics look to Rome for direction on how to evaluate the shroud, as Pope John Paul II discovered en route to Africa in 1989, when he called the shroud a “relic.” When excited reporters asked whether this meant it was the authentic burial cloth of Christ, the Polish pope conferred with an aide before answering more cautiously: “The church has never pronounced itself in this sense. It has always left the question open to all those who want to seek its authenticity. I think it is a relic.”

Clearly, Pope John Paul was personally convinced, although when he went to see the shroud in 1998 he carefully avoided using the term “relic.”

Pope Benedict has long been cautious about the value of private signs, apparitions and revelations. But he seems to consider the Shroud of Turin in a different category.

In his book, “The Spirit of the Liturgy,” then-Cardinal Joseph Ratzinger wrote that the shroud was “a truly mysterious image, which no human artistry was capable of producing.”

In his meditations on the Good Friday Way of the Cross in Rome shortly before his election as pope in 2005, he wrote regarding the 11th station, “Jesus Is Nailed to the Cross”: “The Shroud of Turin allows us to have an idea of the incredible cruelty of this procedure.”