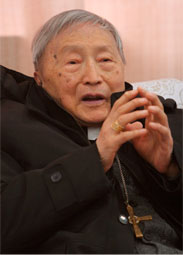 SHANGHAI, China – Bishop Aloysius Jin Luxian of Shanghai has asked his flock to intensify evangelization efforts to mark this year’s 400th anniversary of the introduction of Catholicism to Shanghai.

The Asian church news agency UCA News reported Jan. 3 that in a pastoral letter released Dec. 24, Bishop Jin also urged Catholics to renew themselves spiritually in response to Pope Benedict XVI’s call for prayers to Our Lady of Sheshan May 24.

The pope made the call in his letter to Catholics in China, released June 30. Noting that May 24 is “dedicated to the liturgical memorial of Our Lady Help of Christians, who is venerated … at the Marian Shrine of Sheshan in Shanghai,” he urged the church throughout the world to pray with Catholics in China on that date.

Bishop Jin, 91, a Shanghai native and a Jesuit, started his letter by recounting the story of Catholicism’s arrival in Shanghai in 1608. Bishop Jin told Catholics “not to forget the missioners,” including Jesuits such as Italian Fathers Matteo Ricci and Julius Aleni and German Father Adam Schall, who contributed to local arts and sciences including astrology and medicine.

Bishop Jin also cited some of the Jesuits’ past works in Shanghai, including the building of about 20 high schools, a university, an astronomical observatory, a meteorological observatory and several hospitals. They even had a private Western library and art gallery, collectively regarded as the “cradle of Western arts in China,” the bishop noted.

Those missionaries were already using inculturation in their approach to evangelization and were training the laity to manage their churches, a principle stressed by the Second Vatican Council centuries later, the bishop wrote. Four hundred years ago, he pointed out, the Shanghai church was already enjoying its “era of laity.”

In the second half of his letter, the prelate identified ways of renewing spiritual life and revitalizing evangelization in his diocese.

“Evangelization is the work of all Catholics,” he said, urging his flock not to focus merely on the sacraments and charitable works. Today, there are about 150,000 Shanghai Catholics compared to 100,000 before the communist takeover of mainland China in 1949, but Protestants have grown from 30,000 to more than 200,000 during the same period, he noted.

Priests and nuns must work harder at evangelization, he stressed, adding that churches must be kept open in the daytime for worshippers and visitors. Religious personnel should welcome and share their faith with visitors, he urged, lamenting that some priests and nuns would rather spend time watching television or being on the Internet.

During the anniversary celebrations, the diocese must strengthen its spiritual and prayer life, for which all parishes should conduct prayer sessions instead of having pilgrimages or other gatherings, he advised.

The bishop asked all the faithful to conduct a self-examination at least once a day, in addition to praying the rosary and the Liturgy of the Hours.

Later, he said, the diocese will publicize the details of the anniversary celebrations at the diocesan and parish levels.

Bishop Jin also recalled how Archbishop Celso Costantini, the first apostolic delegate to China, convened the first Catholic synod of China in Shanghai in 1924 and led the bishops to dedicate the church in China to Our Lady of Sheshan.

Referring to Pope Benedict’s letter asking Catholics worldwide to pray for the church in China May 24, Bishop Jin stated: “As Shanghai Catholics, we feel honored. We thank our pope, but feel pressured.”

The prelate said he anticipates many foreign Catholics will visit the Sheshan shrine this year, and he urged local Catholics to show them hospitality.

“We will not let the Holy Father down,” he said, encouraging his flock to pray to Mary and the foreign missionary saints.