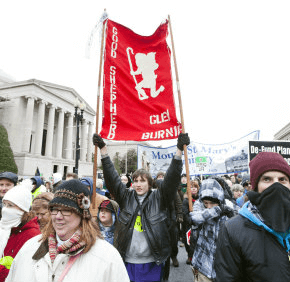 By Jessica Marsala
jmarsala@CatholicReview.org
Before she gave birth to her daughter, author and self-proclaimed “cradle-Catholic” Jillian Amodio, 23, said she thought she understood what it meant to be pro-life.
After holding Juliette, her “miracle baby” – so described because Amodio has endometriosis, which can lead to infertility – she said, “A part of me was just awakened.”
“I just knew that God had given me this great gift by allowing me the privilege of being a mother and raising one of his creations,” said Amodio, who worships at St. John the Evangelist, Severna Park.
Amodio’s newest book, “New Life Within,” a compilation of 40 stories submitted by mothers across the United States and Canada, lets readers know that her experiences and those of other women are unique and cannot be pigeonholed.
“Every woman experiences motherhood different,” Amodio said. “I really wanted to have as many women as possible, from as many different walks of life as possible, share their stories.”
The book includes the experiences of those who have had abortions – and regret their decisions.
“There are a few post-abortive healing pieces in here, but they definitely have a strong pro-life message with them,” Amodio said. “They all had to have some sort of uplifting message at the end. We didn’t want these stories to be just heartbreaking.”
CausePub, Amodio’s publisher for the project, only accepts works that are not in opposition to the Bible’s teachings.
“Jillian is the perfect example of the type of people we want to partner with,” said CausePub co-founder Griff Hanning, of Amodio’s passion for the pro-life cause.
Amodio had worked previously with CausePub, which Hanning describes as both “crowd-publishing for impact” and somewhere between traditional and self-publishing.
Amodio had already been supporting the pro-life cause as a volunteer with the Gabriel Network, the Christian nonprofit that provides pregnant women in Maryland and Washington, D.C. with the emotional and material support they need to preserve the sanctity of life.
While the Gabriel Network played no part in the making or marketing of the book, Amodio plans to donate some of the book’s proceeds to it and other pro-life organizations.
“I just really felt called to kind of use the gifts and talents that God’s given me as a writer to put together a book designed to just express how great motherhood is and how precious each and every life is,” said Amodio, who has written two other books, one about her marriage, the other a short guide for managing tantrums.
Deacon Brent Heathcott of Our Lady of the Fields, Millersville, the executive director and CEO of the Gabriel Network as well as a former Catholic Review blogger, praised Amodio for putting a “face” on the pro-life movement.
“I think Jillian learned a lot by volunteering with us,” said Heathcott, who believes her work with the Gabriel Network helped her better understand the stories she turned into the book.
“I just couldn’t imagine any greater gift,” Amodio said of motherhood.
For more information about the book, visit causepub.com/new-life-within/
Also see:
Conversation with Loyola’s Jesuit Father Linnane – 2014 Hibernian of the Year
Archbishop Lori begins Lent in Catonsville
PrevNext