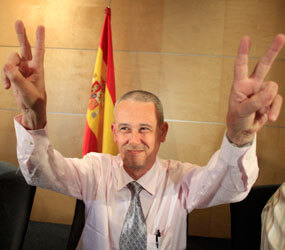 The men flashed fingers in a victory sign and said in a joint statement they hoped their 45 fellow prisoners would be released soon.

Catholics can “take some holy pride that the bishops of Cuba were in this mediation,” Miami Archbishop Thomas G. Wenski told Catholic News Service in a telephone interview July 8.

He called it a “significant turn of events” that church leaders were able to engage with Cuban officials and said it bodes well not only for the Catholic Church in Cuba, but also for the “continued development of civil society.”

An announcement on the website of Cardinal Jaime Ortega Alamino of Havana July 7 said the prisoner release would continue over four months. It said the process leading to the release began with a May 19 meeting of Cuban President Raul Castro, Cardinal Ortega and Archbishop Dionisio Garcia Ibanez of Santiago, president of the Cuban bishops’ conference.

As part of the church-brokered deal, more than a dozen prisoners were transferred to prisons closer to their homes.

“These are significant signs that we hope indicate a steady progress toward a renewed climate of social and political life that we all desire for the Cuban nation,” Father Lombardi said in an editorial on Vatican Radio July 10. He underlined the crucial role of Cuban church leaders in the dialogue process, backed by the diplomatic arm of the Vatican.

“The Holy See has always manifested itself contrary to the embargo, sympathetic to the sufferings of the people, and ready to support any prospect of constructive dialogue,” Father Lombardi said.

The spokesman recalled Pope John Paul II’s words during his historic visit to Cuba in 1998: “Let Cuba open itself up to the world and the world open itself to Cuba.”

“With patience, there has been significant progress in this direction. We all hope that the journey continues,” Father Lombardi said.

The U.S. State Department said July 13 that it applauded the efforts of the Catholic Church, the government of Spain and other who worked for the prisoners’ release.

“While the United States continues to call for the immediate and unconditional release of all political prisoners, this is a positive development that we hope will represent a step toward increased respect for human rights and fundamental freedoms in Cuba,” the statement said.

The prisoner release is reported to be the largest since 1998, when 101 political prisoners were among about 300 inmates released after Pope John Paul visited Cuba.

The prisoners awaiting release were detained in 2003 during a government crackdown. Cuban officials rounded up 75 activists and journalists accused of acting as mercenaries for the United States and said they planned to overthrow the Cuban government.

Of this initial group, some have completed their sentences and others have been released for health reasons.

In June, Cuba released dissident Darsi Ferrer and an ill prisoner, Ariel Sigler, who has been awaiting approval from the U.S. government to join family members in Florida.

Farinas, who was reportedly near death, ended his 130-day strike July 8 after the government announced it was freeing some of the political prisoners.

In May, Catholic Church officials successfully negotiated with Cuban authorities to lift a ban on marches staged by the Ladies in White, a group of wives and mothers of political prisoners.

Castro met June 20 with Archbishop Dominique Mamberti, the Vatican’s foreign minister, and the state-run news media said the meeting “showed the favorable development of relations between the state and the Catholic Church in Cuba.”

Archbishop Wenski told CNS that in the past decades, the Catholic Church has “sought to regain space in Cuban society that had been lost and restricted for years.”

“This space is not for special favors,” he added, “but to carry out its mission.”

He noted that the work to release political prisoners was likewise consistent with the church’s mission and “without self interest.”

The archbishop said the prisoners’ release should please the United States because of the value it places on freedom of speech and conscience.

“We take that so much for granted,” he added, noting that people in this country can form groups for any purpose, but “in Cuba that doesn’t exist.”

Contributing to this story were Carol Zimmermann in Washington and John Thavis in Rome.