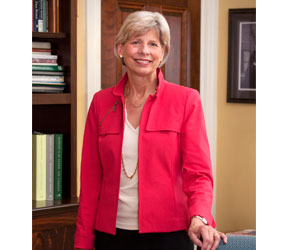 It will be Seurkamp’s 15th year at the school and 43rd in higher education leadership. Seurkamp shared her plans to retire with the school community May 3 during a lunch gathering.

“Leadership requires us to build a strong foundation for the next generation of leaders,” said President Seurkamp in her letter to the Board of Trustees, delivered at its May 2 meeting.
“I certainly inherited an institution with a rich history, fine academic programs and a stellar reputation upon which we were able to lead Notre Dame to the next level of distinction. I trust I leave to the next president core strengths from which new transformational steps will be taken.”

The Baltimore school will be completing its first year as Notre Dame of Maryland University when Seurkamp officially retires. The school announced its plans to make that designation change in November 2010.

The College of Notre Dame is largely known for its women’s school, but has grown during Seurkamp’s tenure. She led the expansion of academic programs to meet the needs of non-traditional students through the College of Adult Undergraduate Studies.

According a news release from the school, Seurkamp helped establish Notre Dame’s School of Pharmacy and led expansion of nursing programs at the undergraduate and graduate level. She also realigned academic programs into the School of Arts and Sciences, School of Education and School of Nursing.

Seurkamp established the school’s first doctoral program, a Ph.D. in education. Under her leadership, the school also spent $120 million for the construction, expansion and renovation of residential and academic facilities.

She also led the Legacy of Leadership capital campaign, the largest fundraising effort in the college’s history, which raised more than $34 million. Seurkamp helped generate nearly $75 million in support for facilities, academic programs and the school’s endowment during her tenure.

The school said it remains committed to its women’s college, something Seurkamp fought to preserve during her tenure, despite financial and demographic challenges.

“Today is bittersweet for all of us at College of Notre Dame,” said graduate Patricia J. Mitchell, chair of the College Board of Trustees, in the news release. “After nearly 15 years, Mary Pat’s mark is indelible and her accomplishments remarkable. Her legacy is a world-class institution of higher learning – Notre Dame of Maryland University – where Catholic ideals of service and character remain valued and where women and men can grow as leaders who change lives.”

The school has begun a national search for Seurkamp’s replacement, and hopes to announce the replacement in spring 2012. U.S. District Court Judge Irene Keeley, a Notre Dame graduate and board of trustee member, will lead the search committee.

“Mary Pat’s deep faith, courage and perseverance have been hallmarks of her leadership at College of Notre Dame,” Sister Kathleen said. “She has articulated and fostered the SSND conviction that the world can be changed through the transformation of persons. We are grateful for her leadership and the legacy she leaves.”
Archbishop Edwin F. O’Brien noted Seurkamp’s service to the Archdiocese of Baltimore and local Catholic schools.

“Dr. Seurkamp has long been a valued educational partner in our archdiocese,” the archbishop said in a statement provided by the archdiocese. “Her contributions to the Church, Catholic education and the citizens of Baltimore and Maryland will be difficult to replicate.

“From her service as president of the College of Notre Dame to her enthusiastic participation on the many boards and committees dedicated to the promise offered through education, Dr. Seurkamp’s distinguished career has left a lasting and indelible mark on the educational landscape in our region.

“More recently,” he continued, “she served on the Blue Ribbon Committee on Catholic Schools, which developed a strategic plan that offers a road map for future stability and growth in our Catholic school system. She also generously and ably led our search for a new superintendent of Catholic schools, an effort that resulted in the selection of an outstanding leader, Dr. Barbara Edmondson.

“Here in the Archdiocese of Baltimore, we have been most blessed to reap the bounty of Dr. Seurkamp’s leadership and commitment to education. We give thanks to God for her service and wish her every happiness in her well-deserved retirement.”