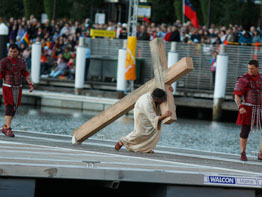 SYDNEY, Australia – In a week when the presence of Pope Benedict XVI in Sydney for World Youth Day had produced multiple memorable moments, the re-enactment of Jesus’ last days on earth was an event the likes of which this city had not seen before.

Combining traditional and contemporary elements of song, dance and drama set amid many of Sydney’s iconic landmarks, this huge devotional production attracted hundreds of thousands to key locations in the city and harbor shores. Joining Sydney participants was a worldwide viewing audience estimated to be more than 500 million.

For three hours Christ’s passion unfolded at Sydney’s Domain, Art Gallery, Opera House, Darling Harbor and the old dockyard at Barangaroo. Pilgrims at each location were linked by giant video screens. Meanwhile a golden winter’s afternoon light turned to twilight and finally full darkness on the harbor as Jesus’ body was taken down from the cross.

Pope Benedict XVI was at St. Mary’s Cathedral to watch the re-enactment of the Last Supper on the steps. Afterward, the pope prayed that those “who do not know or have forgotten” Christ should seek him in the Eucharist.

“Draw us to your real presence at Mass,” prayed the pope. “Help us to understand that communion with you also means union with all those to whom you give yourself. Make us generous and insightful as we try to walk in your footsteps.”

One poignant departure from the European tradition of the stations was the depiction of Simon of Cyrene as an Aboriginal man. In this vignette the actor was manacled to other Aborigines to reflect the way that colonial powers captured and chained indigenous people on the edges of the frontier in the 19th century.

When, in the enactment of the stations, the Roman guard released this man from his shackles and directed him to take up Jesus’ cross, it was a metaphor of the backbreaking burden that Australia’s indigenous people have labored under since white settlement 220 years ago first began to separate them from their land.

Reading the prayer at this station was Louise Campbell, an Aboriginal Catholic education officer who works in the Maitland-Newcastle Diocese, north of Sydney. In collaboration with her brother, Richard Campbell, a World Youth Day indigenous artist, Louise Campbell has developed many Aboriginal interpretations of scriptural images. Her brother’s paintings of the Stations of the Cross, which hang on the walls of the Church of Reconciliation in suburban La Perouse, were widely used in World Youth Day promotions.

As members of the so-called Stolen Generations, the brother and sister were separated as young children when welfare authorities broke up their family of 11 siblings. The children were sent to white foster homes and institutions, and it was not until 20 years later that the two were reunited. They are both proud of their Aboriginal and Catholic heritage.

Louise Campbell’s prayer reached out to all the marginalized peoples in society – “the sick, starving, jailed, depressed, the refugees and strangers.”

“They may not seem to match our image of you and this, too, has come to be true of many of the indigenous peoples of our world,” she prayed. “But they are truly are sisters and brothers. Help us not to ignore them, but to walk with them and lighten their burdens.”