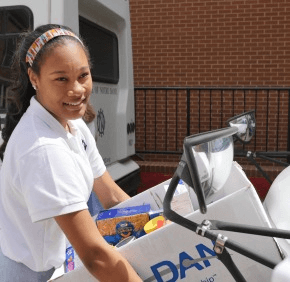 At Bowie State University, Leah Rowell will talk about June 2014, when she headed to Staten Island, N.Y., and helped restore a home damaged by Hurricane Sandy.

When Kiley Tempert arrives early at the University of Dayton in August for a leadership camp, she will recall the fall of 2013, when after-school Thursdays were spent organizing arts and crafts for students at a nearby parish school.

And at Mount St. Mary’s University, explaining how service was ingrained into her scholastic experience, Kayla Pahl will reflect on the start of her sophomore year in 2012, when her father’s job necessitated dropping her off on Aisquith Street at 6 a.m. – which meant she had the daily inspiration of a legendary School Sister of Notre Dame all to herself for 90 minutes.

Pahl’s presidency of “Hildie’s Helpers,” Tempert’s immersion in Project K.IND and Rowell’s experience with a tool belt are three examples of how service is ingrained into the Institute of Notre Dame experience.

The commitment to that ethic, which is coordinated by School Sister of Notre Dame Kathleen Jager, was recognized in April by Catholic Charities of Baltimore, which honored IND with its Anne Lindsay Otenasek Youth Service Award.

In early May, a few weeks before their May 31 graduation, Pahl, Rowell and Tempert spent a lunch break explaining the effect of their service at IND, from discovering the power of helping just one person to the impact it had on their college selection.

“We perform service here, and we don’t even realize it,” said Tempert, a parishioner of St. Pius X in Rodgers Forge who attended the parish school at Immaculate Heart of Mary in Baynesville. “On a Peer Ministry retreat last summer, we made planters for the school; that was a form of service to IND.

“It’s fun, it’s meaningful. … The first state school (college) I looked at, it was not like IND. I want to be in a community where everyone lives in service, and that helped me pick my college.”

Before she takes a single business class at Dayton, a Catholic college in Ohio, Tempert will spend a week in its “Camp Blue,” developing her already formidable leadership skills, on campus and at a YMCA camp in northern Kentucky.

During the 2014-15 school year, she was one of the 104 IND students to serve as tutors and “big sisters” through Project K.IND, which sends them out to Catholic K-8 schools in the community, such as St. Casimir and Ss. James and John.

In response to the crisis stemming from Freddie Gray Jr.’s death, Hildie’s Helpers collected and delivered canned goods to an outreach in West Baltimore, and staged a “Tag Day” to raise funds for the Baptist church whose senior housing was destroyed by a suspicious fire.

Over the school year, they dropped off 55 Thanksgiving turkey dinners to their neighbors in need, and made and delivered sandwiches to the Rescue Mission on Central Avenue, within walking distance of the all-girls’ school.

“You meet individuals who can teach you something about yourself,” said Pahl, a parishioner of St. Ursula in Parkville. “Through my four years here, I’d like to think that service has become a way of life. You give, and receive, at the same time.”

Pahl will study criminal justice and sociology at Mount St. Mary’s in Emmitsburg.

At Bowie State, Rowell will major in government and minor in economics, with an eye on a career in politics. She learned about bipartisanship last June, when she and six other IND students spent a week repairing a Staten Island home that had been ravaged by Hurricane Sandy in October 2012.

They were housed in a Presbyterian manse, and used materials donated through the St. Bernard Project, which had previously enlisted IND students on Hurricane Katrina relief in New Orleans.

“When I got home, I told my mom, she has a free construction worker,” Rowell said. “I swear, I know how to put a floor down myself. Insulation, we did that too. Mr. Reeb was so into it, he was a hoot.”

Mike Reeb, an English teacher and Renaissance man, came to IND in 2010 with carpentry and farming skills, not to mention decades of journalism experience at the Baltimore Sun.

IND’s Sandy Relief coordinator, he will take seven more students to Far Rockaway, in Queens, for service immersion this month. The idea is to plant a seed, like the one growing in Rowell.

“IND pushed me, to recognize that service completes me,” she said. “If I can improve someone else’s life, that helps them, and me.”

Beyond the Bell: St. Mary’s students anticipate trip to Spain