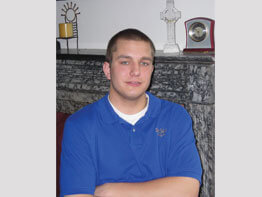 Working for a week with Father John Lombardi, chaplain of the National Shrine Grotto of Lourdes in Emmitsburg, Cory and other volunteers helped gut the waterlogged homes – saving the owners $10,000.

“I really liked it,” remembered Cory, a parishioner of St. Peter the Apostle in Libertytown and a graduating senior of St. John’s Catholic Prep in Frederick.

“The homeowners were really appreciative,” he said. “It felt good to help.”

Volunteering in New Orleans was just one of many ways Cory has reached out to the wider community. For the last several years, he has volunteered as an altar server at the National Shrine Grotto of Lourdes. He has helped out at his parish’s food bank and thrift shop, and he has volunteered through the Boy Scouts. Cory also worked for five years in a weeklong summer basketball camp for children, and he regularly volunteers to keep up the grounds at the Lourdes grotto.

Service is a big part of Cory’s life because it’s a way of living his faith, he said.

“I like being a part of helping others,” he said.

Helping young people has been especially meaningful, he said.

“Kids really look up to you,” he explained. “They see a lot of older kids who don’t do the right thing, so it’s good to set an example for them. We teach them what not to do and how to act in the right way.”

A soccer player all four years at St. John’s Catholic Prep and a basketball player for two years, Cory has maintained a 3.4 grade point average in high school.

As he prepares to attend Mount St. Mary’s University in Emmitsburg this fall, Cory said he is open to the possibility of a religious vocation.